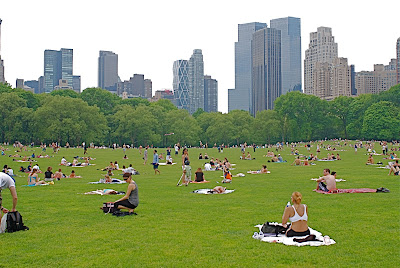 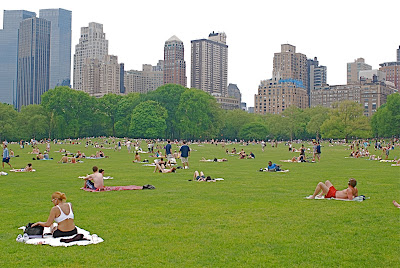 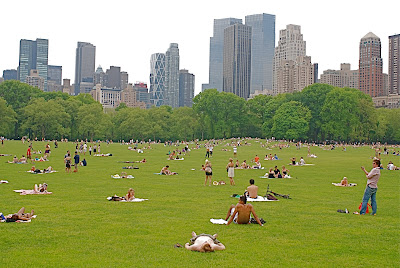 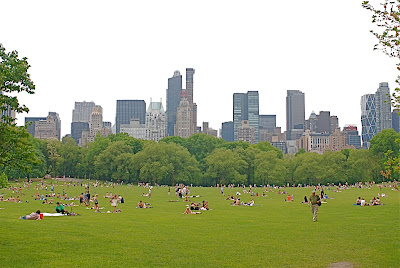 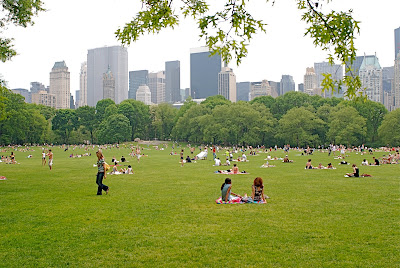 May 2, 2010, Sheep Meadow, Central Park
From centralpark.com
While it has been many years since sheep actually inhabited this verdant lawn on the westside of the park, Robert Moses having exiled the sheep to Prospect Park in 1934, it still remains a pastoral setting that invites sunbathing and the enjoyment of a good book.
Original entries to the design competition for Central Park were required to include a parade ground and Olmsted and Vaux reluctantly included one in the first Greensward Plan. Soon after winning, however, they managed to convince the commissioners that a quiet park landscape was perhaps not the best place for military displays. To re-enforce the quiet nature of the “Green” as it was then called a flock of sheep was added in 1864. A Sheepfold was built across the drive in 1870 and twice a day a shepherd would hold up carriage traffic, and later automobiles, as he drove the animals to and from the meadow. After the sheep had been banished to Brooklyn the Sheepfold was converted into what is now the world famous restaurant Tavern on the Green.
Like the Great Lawn and the North Meadow the Sheep Meadow is now meticulously cared for by the parks department and rigid rules enforced to ensure that it doesn’t suffer the decline caused by overuse. On a crowded weekend afternoon as many as 30,000 visitors may arrive to enjoy the tree ringed expanse and it is only by careful management that meadow can be preserved.
Posted by Noel Y. C. at 7:08 PM