JOSH RITTER Flying High In His New Album, “So Runs the World Away” 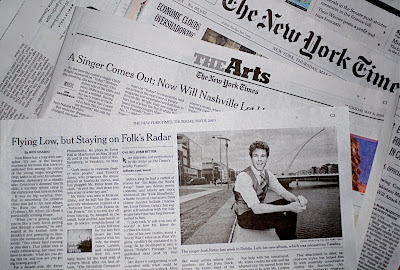 American singer-songwriter JOSH RITTER is touring to promote his sixth album "So Runs The World Away." Born in Moscow, Idaho on October 21, 1976 to two leading neuroscientists who were my mentors in graduate school, Mr. Ritter has been compared to Bob Dylan, Bruce Springsteen and Leondard Cohen. Yesterday's edition of the New York Times featured Mr. Ritter in an article authored by Ben Sisario with Mr. Ritter's photo taken by Derek Speirs. Mr. Ritter's career continues to take a steady upward progression and acclaim and win over loyal fans. He plays at Town Hall in Manhattan on May 19 and 20, and at the Music Hall of Williamsburg, in Brooklyn, on May 22.
Posted by Noel Y. C. at 4:06 AM