"Silk and Bamboo: Music and Art of China" at the Metropolitan Museum of Art 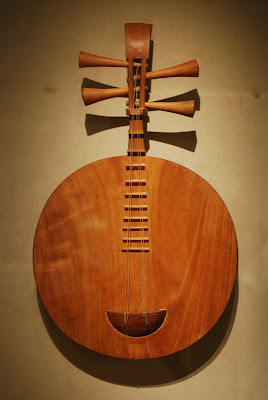 Yuequin, (Qing dynasty, 1644-1911), lute made of rosewood. Its four strings are tuned in pairs. It was found in popular ensembles and the Beijing opera. 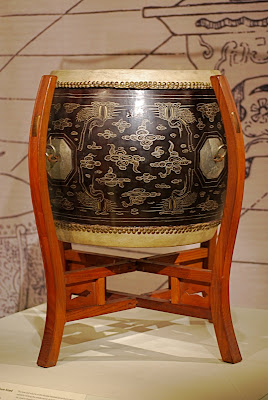 Tanggu (Qing Dynasty, 1644-1911), a medium sized drum made of wood, hide, lacquerwork and metal. Newer adaptations of the tanggu are now used in the modern Chinese orchestra. 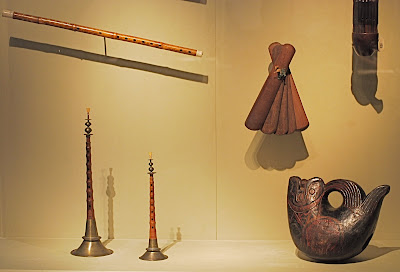 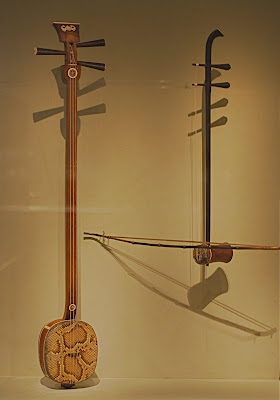 A special exhibition called "Silk and Bamboo: Music and Art of China" opened 2 days ago at the Egyptian Art galleries of the Metropolitan Museum of Art. Above are some photos that I took yesterday. This exhibition celebrates the musical heritage of China—one of the oldest continuously documented traditions with roots reaching back more than 8,000 years. Featuring some 60 objects and illustrations—drawn largely from the Museum’s collections of Asian art and musical instruments – Silk and Bamboo: Music and Art of China reveals the dynamic interplay of cultures, the continuity of musical practice, and the diversity of China’s musical traditions from the fifth century B.C. to the present.
This exhibition displays a wide variety of Chinese musical instruments and art, including a rare ivory-covered pipa (lute) and a lacquered qin (zither) of the Ming dynasty (1368-1644), extraordinary bells of the fifth century B.C., and a set of pottery figures in the shapes of dancers and musicians from the Han dynasty (206 B.C.-220 A.D.) and Tang dynasty (618-907).   The exhibit runs through February 7, 2010. (information from the Met website).
Posted by Noel Y. C. at 7:02 AM