Marcel Odenbach's Paper on Paper Collage: "You Can't See the Forest for the Trees" 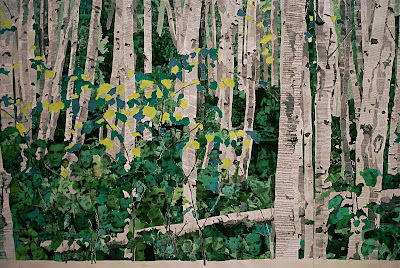 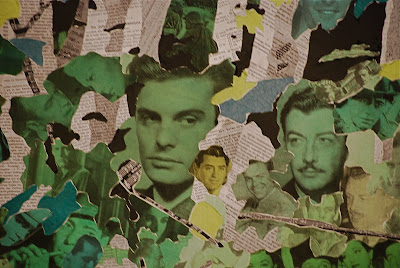 Detail of the collage 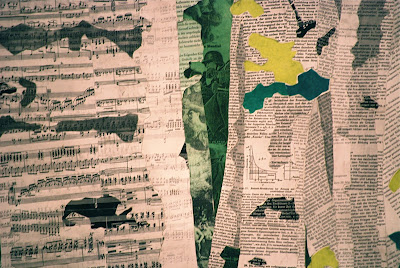 One of the large collages on display at the Museum of Modern Art is MARCEL ODENBACH'S "You Can't See the Trees in the Forest." Odenbach (German, born 1953) created this piece using cut-and-pasted printed paper, ink and pencil on two pieces of paper in 2003. The work plays on a common expression, and is a plea to not only see this particular forest as a forest but also take into account its context: the largest Nazi concentration camp, Auschwitz-Birkenau, was named after the many birch trees surrounding the complex (from MOMA caption).
Ken Johnson writes, "Mr. Odenbach's collages have some visual interest. In ''You Can't See the Forest for the Trees,'' which measures about 7 by 10 feet, there is a productive tension between the cohesive image of a birch forest and the disjunctive patchwork of texts and photographs from which it is made. That we construct the world out of zillions of scraps of received information is philosophically intriguing; but Mr. Odenbach's banal social messages short-circuit more imaginative possibilities."
Posted by Noel Y. C. at 6:27 PM

wow. collages and mosaics always were my favorite works of art. love the detail that you don't notice until your inches away

is there anywhere i can buy a poster of this picture! its so amazing

do you know where i can buy a poster of this amazing Picture ! i love it and want it in my room ! :-)

sorry kate, i am not aware of the availability of a poster of this picture.