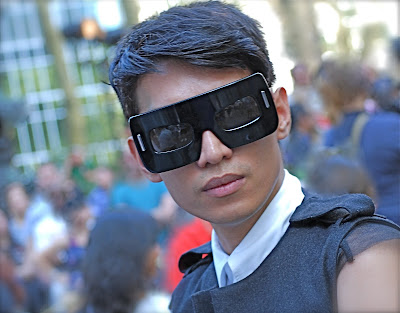 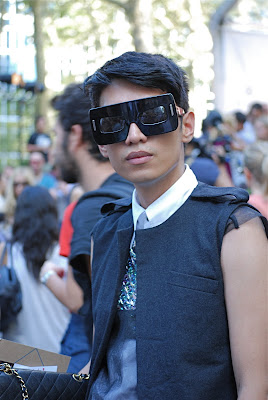 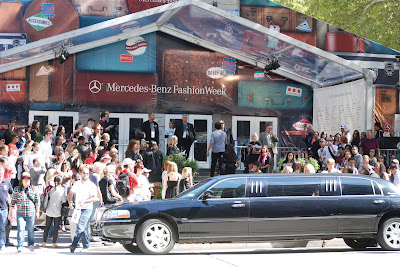 Making a strong presence at the New York Fashion Week in Manhattan's Bryant Park this season are international fashion bloggers including BRYANBOY, the "internationally loved" superstar blogger from the Philippines. The boy who used to wear his mother's pearls to glam up his boring Catholic school uniform now has a MARC JACOBS bag named after him. Bryanboy, who describes himself as "planet Earth’s favourite Third World fag” who is “so gay he sweats glitter” has earned a huge fanbase worldwide. Last Sunday, I made these images of the phenom blogger in his chic Marc Jacobs sunglasses outside the tent. He is going to be a very interesting subject of a movie someday! To borrow his trademark sign off, "Baboosh!"
From wikipedia:
A former web developer, he started blogging at age 17 from his parents' Manila home. His eponymous blog, which attracts 180,000 visitors per day, won the 2007 Philippine Blog Award for Best Fashion & Lifestyle Blog. The New York Post named him one of the nine hottest internet celebrities, and news.com.au has called him "one of Fashion 2.0’s biggest superstars" and a "phenom in the fashion blogosphere". His blog, called "hysterically camp" by the Sydney Morning Herald, is known for its "witty and often bitchy commentary."
The blog has also attracted the attention of many in the fashion industry. Bryanboy fans often send in photos of themselves in his signature pose—standing with hips thrust to one side and a handbag in an outstretched arm—or with handwritten signs declaring "I love Bryanboy"; celebrity participants have included Marc Jacobs, Tanya Dziahileva, Alexandra Agoston, and Rachel Clark. Though no brand spokesman commented on the matter, it was widely reported that Bryanboy's trademark pose was referenced in two 2006 Fendi advertisements. Marc Jacobs even went so far as to name a handbag after him (the BB ostrich bag) after Bryanboy gushed about it in his blog. www.bryanboy.com
Posted by Noel Y. C. at 3:00 AM