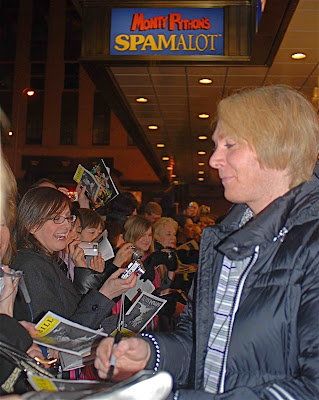 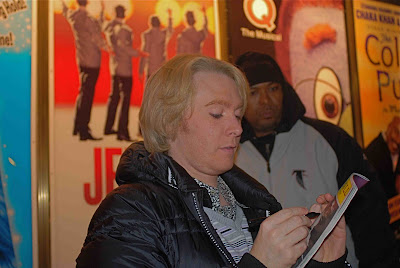 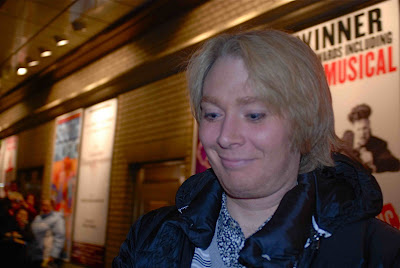 Youtube video by Yollie950
Joining the list of American Idol alumni who become celebrated Broadway performers is recording-artist, CLAY AIKEN. He made his Broadway debut as Sir Robin (among others) in Monty Python's SPAMALOT at the Shubert Theatre (225 West 44th Street). He will be with the production through May 4, 2008. I made pictures of Mr. Aiken signing autographs for enthusiastic Idol-worshipping Claymates at the stagedoor of the Shubert Theatre after this evening's performance.
Directed by Mike Nichols, who won his eighth Tony Award for his direction of the new musical, Monty Python's Spamalot has a book by Eric Idle, "lovingly ripped-off" from the screenplay of the Pythons' best- loved film, Monty Python and the Holy Grail by Graham Chapman, John Cleese, Terry Gilliam, Eric Idle, Terry Jones and Michael Palin. The music is by Eric Idle and John DuPrez. The show was choreographed by Casey Nicholaw while sets and costumes were created by multiple Olivier Award-winners Tim Hatley. Hugh Vanstone is the lighting designer.
Clay Aiken, probably one of the few successful American Idol contestants, has sold more than 6 million albums, co-wrote a best-selling book, and, played six sold-out concert tours. He gained fame when he won second-place in the second season of the hit FOX television reality show "American Idol."
Winning more awards than any other show in the 2005 Broadway Season, including the Tony Award for Best Musical and the Grammy Award for Best Cast Recording, Spamalot has set box office records since opening on Broadway to critical acclaim in March, 2005 at the flagship Shubert Theatre.
Posted by Noel Y. C. at 8:49 PM

Great pictures of Clay! Thanks!

He was amazing! I am a Clay Aiken fan, and even I am amazed at how incredible he is in Spamalot.

Thanks for the great pix of Clay!

How was/is Clay in Spamalot?? A revelation! Phenomenal! Perfect! Three different characters-three different English accents! Mike Nichols was right when he said: "Clay is a master at characterization." I knew Clay could act; but he just blew me away in Spamalot. Can't wait to see it again in March. OK, NY newspaper and magazine critics-where are you??? Afraid you just may write something positive about Clay??? Stop being wimps and go see Clay and tell the rest of the world: CLAY IS INCREDIBLE!!!

Thanks for the pictures. I've heard that Clay is doing a wonderful job. I wish I could afford to go to NY and see the show.

You can get discounted tickets for numerous Broadway and Off-Broadway shows including Spamalot by signing up for a free membership to Playbill.com.