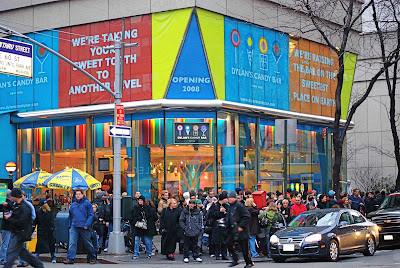 VICTORIA BECKHAM and her son CRUZ visited DYLAN'S CANDY BAR on the Upper Eastside last Saturday, February 9. I didn't manage to make a photograph of the former SPICE GIRL, but I was able to capture the scene outside the famous candy store on my way to the subway from my apartment. During her rise to fame with 1990s pop group the SPICE GIRLS, VICTORIA was dubbed POSH SPICE by the British tabloid press. Universally referred to as "Posh", she is married to English football player DAVID BECKHAM.
Dylan's Candy Bar is the supersize candy store located at 1011 Third Avenue  at 60th St.across the street from Bloomingdale’s. The store is the brainchild of DYLAN (daughter of RALPH) LAUREN and JEFF RUBIN (an FAO Schweetz co-creator). Boasting a ten-foot artificial chocolate bunny and staircases laden with gummy candies, the candy retailer's Manhattan location has become a tourist draw in its own right. It owns its own line of candies and chocolate, and stocks other brands as well, including M&Ms, PEZ, Dubble Bubble, Wonka, and Jelly Belly. In addition to candy and chocolate, candy-themed clothing can be purchased here. Many places also sell ice cream or ice cream floats. Dylan's has added four more locations (two more in New York; and two in Orlando, Florida and one in Houston, Texas) and has plans to expand to the West Coast.
Posted by Noel Y. C. at 5:35 PM