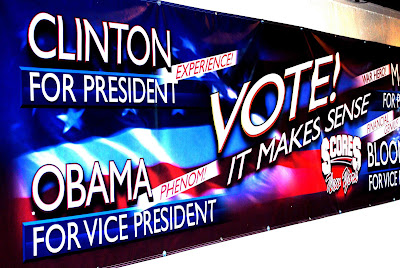 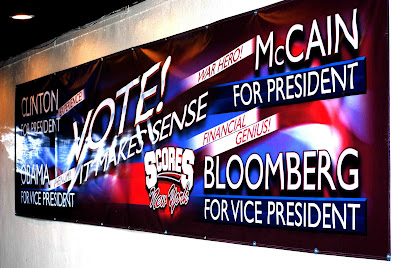 On this Presidents' Day, presidential candidates are getting more attention than the present or past presidents. Above is a banner endorsement of Democrat and Republican teams, and encouraging people to vote. I'm sure Oprah won't be amused. The endorsement is from SCORES, a well-known strip club (or I think they prefer to be called "gentlemen's club"). Inside Scores, their private room is called "President's Club" (according to their website). The banner is displayed outside SCORES on 60th Street on the Upper Eastside.
From Patriotism.org:
The original version of the holiday was in commemoration of George Washington's birthday in 1796 (the last full year of his presidency). Washington, according to the calendar that has been used since at least the mid-18th century, was born on February 22, 1732. According to the old style calendar in use back then, however, he was born on February 11. At least in 1796, many Americans celebrated his birthday on the 22nd while others marked the occasion on the 11th instead. By the early 19th century, Washington's Birthday had taken firm root in the American experience as a bona fide national holiday. Its traditions included Birthnight Balls in various regions, speeches and receptions given by prominent public figures, and a lot of revelry in taverns throughout the land. Then along came Abraham Lincoln, another revered president and fellow February baby (born on the 12th of the month). The first formal observance of his birthday took place in 1865, the year after his assassination, when both houses of Congress gathered for a memorial address. While Lincoln's Birthday did not become a federal holiday like George Washington's, it did become a legal holiday in several states. In 1968, legislation (HR 15951) was enacted that affected several federal holidays. One of these was Washington's Birthday, the observation of which was shifted to the third Monday in February each year whether or not it fell on the 22nd. This act, which took effect in 1971, was designed to simplify the yearly calendar of holidays and give federal employees some standard three-day weekends in the process. Apparently, while the holiday in February is still officially known as Washington's Birthday (at least according to the Office of Personnel Management), it has become popularly (and, perhaps in some cases at the state level, legally) known as "President's Day." This has made the third Monday in February a day for honoring both Washington and Lincoln, as well as all the other men who have served as president.
Posted by Noel Y. C. at 4:45 AM