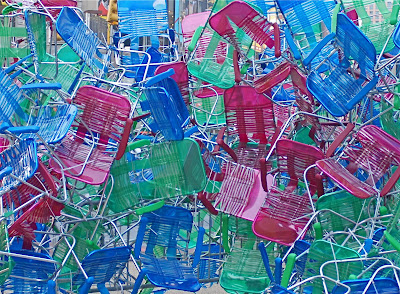 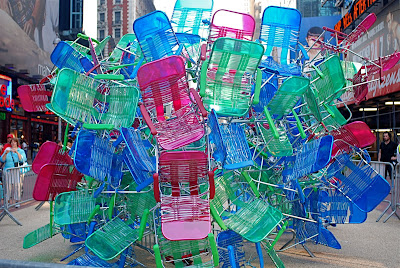 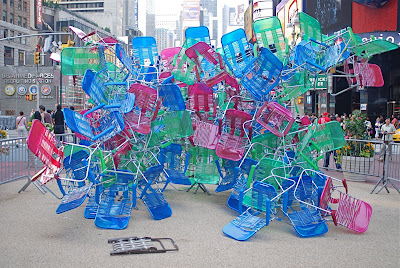 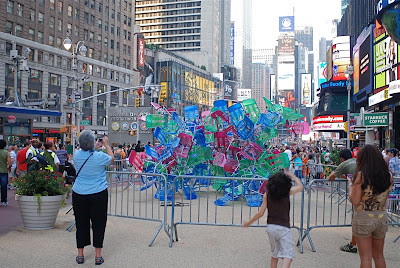 The summer lawn chairs in Times Square that invited much debate and disdain, are being given one final moment in JASON PETER'S sculpture called "Now You See it Now You Don't." With the summer winding down and the arrival of the official planters and furnishing for the new Broadway Pedestrian Plaza, Brooklyn-based artist Peters was commissioned to create "art" out of the lawn chairs before they disappear. The artist used about 100 chairs and tied them together with a white plastic material.
Three months ago, stretches of Broadway in Times Square were closed to vehicular traffic and transformed into an outdoor pedestrian mall. This change became a lightning rod for debate between locals and visitors alike. The debate first started around the traffic caused by sections of the closed avenue. The brightly colored beach chairs that were placed in the pedestrian area for visitors to sit on were looked down upon by many New Yorkers who called the chairs tacky, while lots of tourists loved them.
""The lawn chairs are kind of funny because of the colors and the translucence. So I'm hoping that when the sunlight hits, they will get a nice kind of play on the floor through that. I was a little worried about working in Times Square just because of the exposure, this is the most exposed I've been and kind of little funny to me being in a closed pen and feeling somewhat like a caged animal or on display kind of thing. But it's been much more, it's been much better than I thought it would be and it's been a great experience." - Jason Peters

This installation is a public art project of the Times Square Alliance, and is supported in part by the Rockefeller Foundation. The sculpture of lawn chairs is on view from August 14-16.
Posted by Noel Y. C. at 6:33 AM