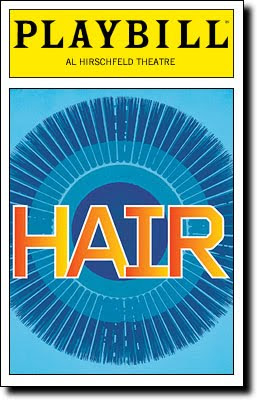 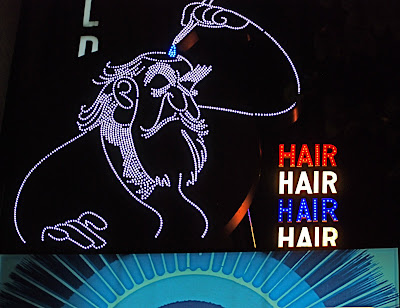 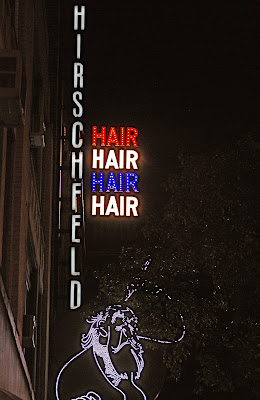 I caught this evening's performance of the Tony Award winning revival of the Broadway musical HAIR at the Hirschfeld Theatre on 45th Street (between 8th and 9th Avenues). Even though I didn't have any nostalgia for the '60s, I enjoyed this musical with a score including such familiar songs like "Let the Sun Shine In," "Aquarius," "Hair" and "Good Morning Starshine." The musical tells about a group of hopeful, free-spirited young people who advocate a lifestyle of pacifism and free-love in a society riddled with intolerance and brutality during the Vietnam War in the 60s and 70s. The message of hope, peace and change continue to be relevant today. The very talented cast included powerful-voiced WILL SWENSON, SASHA ALLEN, DARIUS NICHOLS, BRYCE RYNESS, CAISSIE LEVY, KACIE SHEIK. WILL SWENSON was very charismatic as Berger. At this performance, the role created by Tony Award nominee GAVIN CREEL was performed by understudy, PARIS REMILLARD who was brilliant and mesmerizing in the show. It was reported that Mr. Creel injured his ankle during the August 19 matinee. The staging was interactive, and the lighting design was superb. I especially liked the dramatic lighting at the end of the second act. There was also one distinct display of full-frontal nudity. After the curtain call, the audience members were encouraged to climb on stage, let their hair down, and join the cast in joyous singing and dancing. And they did.
Here are some of the reviews:
Variety - “The enhanced production now at the Al Hirschfeld is sharper, fuller and even more emotionally charged. Director Diane Paulus and her prodigiously talented cast connect with the material in ways that cut right to the 1967 rock musical’s heart, generating tremendous energy that radiates to the rafters."
New York Times - “But what distinguishes “Hair” from other recent shows about being young is the illusion it sustains of rawness and immediacy, an un-self-conscious sense of the most self-conscious chapter in a person’s life.”
USA TODAY - "The new Public Theater revival ( * * * * out of four), which opened Tuesday at the Al Hirschfeld Theatre, not only avoids potential obstacles but finds a resonance in Hair beyond any parallels between the turbulent '60s and our own troubled times. What director Diane Paulus and her flawless cast have achieved is a testament to the indomitability and transience of youth, with all the blissful exuberance and aching poignance that entails."
Boston Globe - “But it has not, to put it mildly, aged well. What may once have seemed winningly ingenuous and gently rebellious now feels unbearably naive and unforgivably glib. The antiwar sentiments of the show are still painfully relevant but uselessly one-dimensional, and beyond that there’s … what? Drug jokes, sex jokes, squares-vs.-hippie jokes, and a lot of other stuff that must have sounded a little corny even the first time around.”
Lottery for Box-Seat Tickets:
The American Tribal Love-Rock Musical has established a pre-performance ticket lottery for box-seat tickets, aptly renamed "BE-IN BOXES." Those wishing to purchase these tickets are asked to show up at the Al Hirschfeld Theatre 2 1/2 hours before each performance for a drawing that will take place 2 hours before curtain. For every performance, a limited number of lucky audience members will receive $25 "be-in box" tickets, promising to make their experience of the show both affordable and unique.
Posted by Noel Y. C. at 8:48 PM

"Hair" is the only show that I’ve ever seen that felt like an experience. The cast aka The Tribe is excellent, the production is fantastic and the songs sound better then ever. The shows themes (Sex, War, Drugs, Race) are as relevant today as they were forty years ago. The best part is the bond that the Tribe forms with the audience. It resonates with everyone long after they’ve left the theater. I urge all theatergoers to order tickets, participate in the show and dance in the finale. You will never forget the "Hair" experience.