THE GARMENT WORKER by Judith Weller 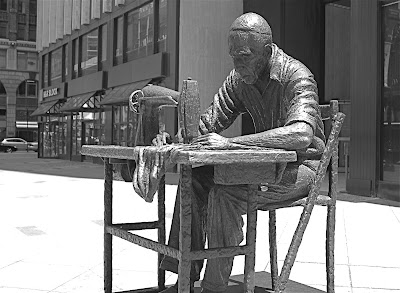 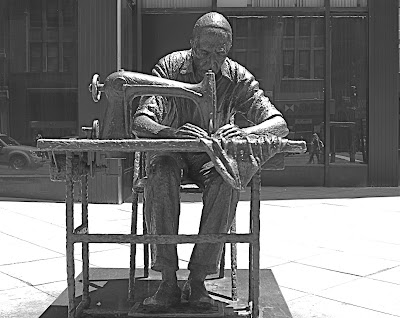 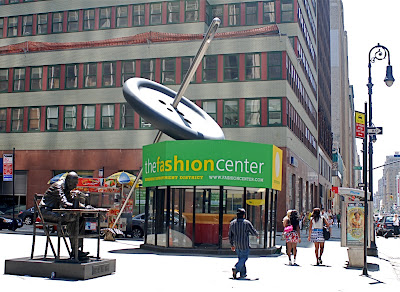 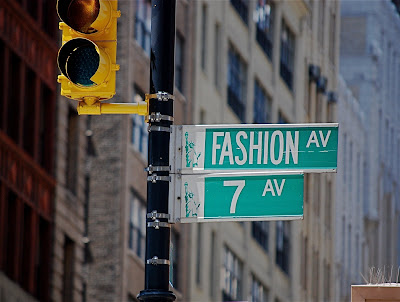 This is a permanent sculpture located at 555 Seventh Avenue (also known as Fashion Avenue) between 39th and 40th Streets in midtown Manhattan. The 8-foot bronze sculpture called "The Garment Worker" was created by JUDITH WELLER. It depicts a man sitting at a sewing machine sewing a garment. The piece is a tribute to the history of the area as Manhattan's Garment District or Fashion District. Adjacent to the sculpture is a giant needle threading a button and the Fashion Center Business Improvement Kiosk.
From primemanhattan.com:

Garment District History:
New York first assumed its role as the center of the nation's garment industry by producing clothes for slaves working on Southern plantations. It was more efficient for their masters to buy clothes from producers in New York than to have the slaves spend time and labor making the clothing themselves. In addition to supplying clothing for slaves, tailors produced other ready-made garments for sailors and western prospectors during slack periods in their regular business.

Prior to the mid-nineteenth century, the majority of Americans either made their own clothing, or if they were wealthy, purchased "tailor-made" customized clothing. By the 1820s, however, an increasing number of ready-made garments of a higher quality were being produced for a broader market.

Manufacturing in the state of New York, and in New York City in particular, faded in the late 20th century. This has been exemplified by the decline of the Garment District. The district lost well over a thousand factory jobs per year, and men pushing racks of garments from one workshop to another ceased to crowd the streets. Factories and showrooms are increasingly becoming condo apartments and retail.

I used to pass by this sidewalk and always notice the huge sculpture along with the extraordinarily-sized needle & button. Too bad, they built the kiosk too close - I haven't seen that before, is that new?

The kiosk has been there since the mid 90's I believe but it used to be black. Hmmm, are bright colors the new black?

Too bad this page never mentions that the guy at the sewing machine is a Jewish immigrant from Eastern Europe. These folks once formed the core of the garment industry and became the core of the early labor rights movement in the US. The Garment District is more than about fashion!

I hate to quibble but I've always thought that his yamulke was too big. The details are important. Perhaps they used to be larger?