THE EGO AND THE ID, Franz West's New Public Art 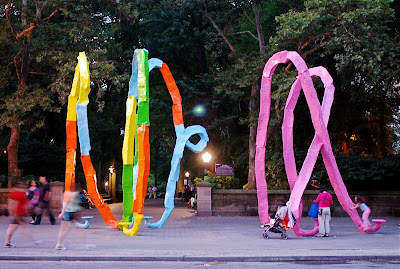 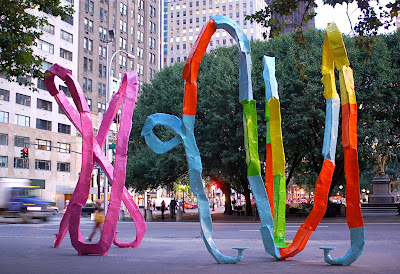 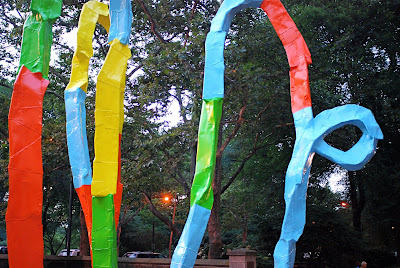 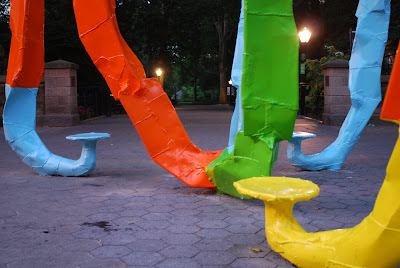 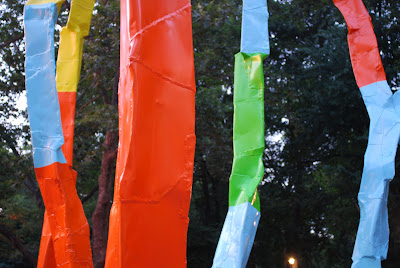 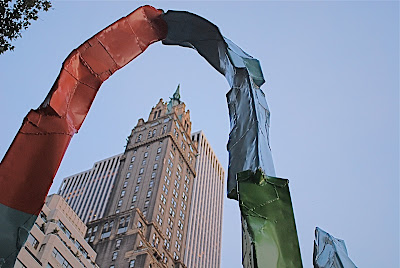 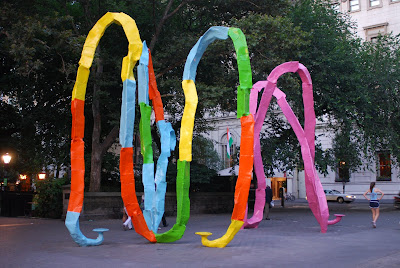 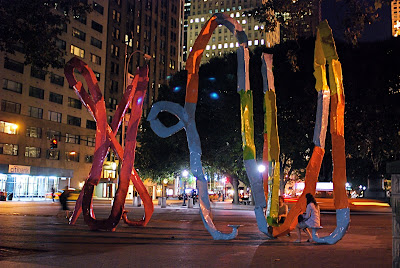 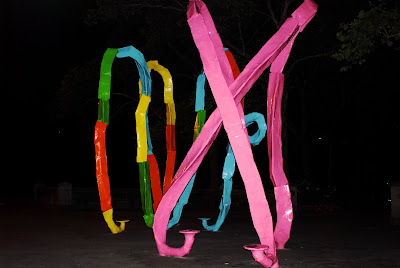 The new public art at the Doris Freedman Plaza in Central Park is the colorful sculpture called THE EGO AND THE ID by Austrian artist FRANZ WEST. This piece is on display until March 2010. His other smaller sculptures are on display at the MOMA.
From publicartfund.org
"The Ego and the Id" is internationally acclaimed artist Franz West's newest and largest aluminum sculpture to date. Soaring 20 feet high, the piece consists of two similar but distinct, brightly colored, looping abstract forms, one bubble gum pink and the other alternating blocks of blue, green, orange, and yellow. Each of the forms curve up at the bottom creating stools that invite passersby to stop, take a seat, and directly engage with the artwork. The sculpture is only truly complete once the viewer interacts with the work. The Ego and the Id is consistent with the artist's overarching desire to produce sociable environments for viewing art using his signature combination of whimsy and monumentality.
Created specifically for West's first comprehensive American retrospective this past fall at the Baltimore Museum of Art, The Ego and the Id borrows its name from one of Sigmund Freud's best known texts, in which he explores the ego's battle with three forces: the id, the super-ego, and the outside world. Removing the gallery walls heightens the connection between West's work and Freud's work, allowing these forces to intermingle with the streets of New York City as a backdrop.
Franz West began his career in mid-1960s Vienna during the height of a local movement called Actionism. His earliest sculptures, performances, and collages were a reaction to this movement, in which artists engaged in displays of radical public behavior intended to shake up art-world passivity. In the early 1970s, West began making a series of small, portable sculptures called "Adaptives" ("Paßstücke"). The Ego and the Id is in many ways an oversized version of an "Adaptive." The sculpture also directly relates to the artist's furniture installations, which transform galleries, museums, and public spaces into lounge-like environments. West has described the correlation between his plaster objects and furniture installations as a way to put dreams on earth; "The Adaptives would be the dream and the chairs and tables would be the Earth."
About Franz West
Franz West lives and works in Vienna, where he was born in 1947. He has exhibited internationally for more than three decades in galleries and museums, and at major festivals including Documenta IX (1992) and Documenta X (1997), Kassel, Germany; Sculpture Projects in Münster (1997); and the Venice Biennale (1988, 1993, 1997, 2003, 2007). His first major American retrospective, Franz West, To Build a House You Start with the Roof: Work, 1972-2008, debuted at the Baltimore Museum of Art (2008), and then traveled to the Los Angeles County Museum of Art (2009). His work has been exhibited at Gagosian Gallery, New York (2008); Gagosian Gallery, London (2006); Kunsthalle Wien, Vienna (2003); Whitechapel Gallery, London (2003); and Museo Nacional de Arte Reina Sofía, Madrid (2001). He had a solo exhibition at The Museum of Modern Art, New York in 1997.
Location and Directions
Subways: N, R to Fifth Avenue; 4, 5, 6 to 59th Street/Lexington Avenue. The work is free to the public and is on view daily.
Posted by Noel Y. C. at 6:10 PM

Email ThisBlogThis!Share to TwitterShare to FacebookShare to Pinterest
Labels: Franz West, Public Art, The Ego and the Id