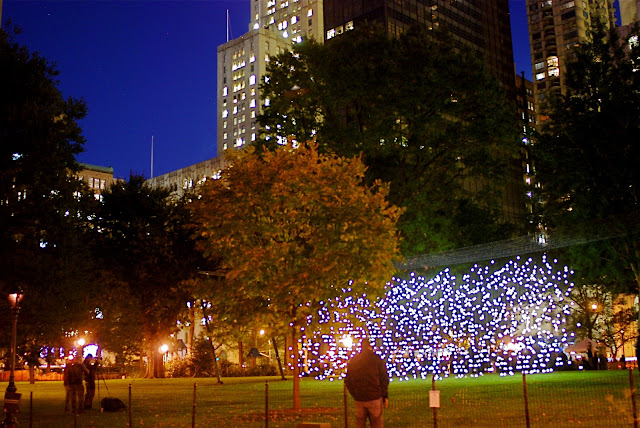 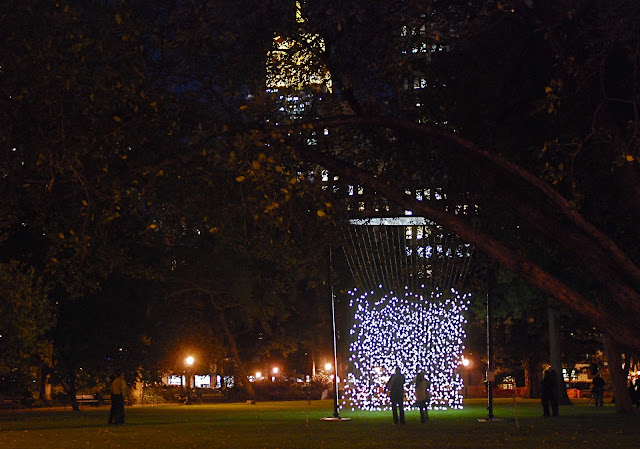 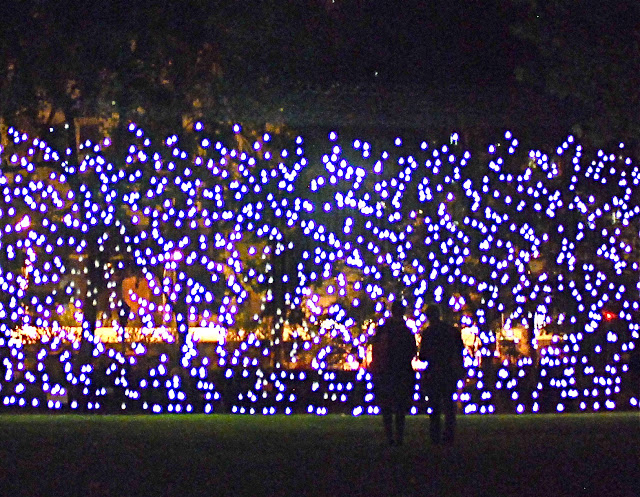 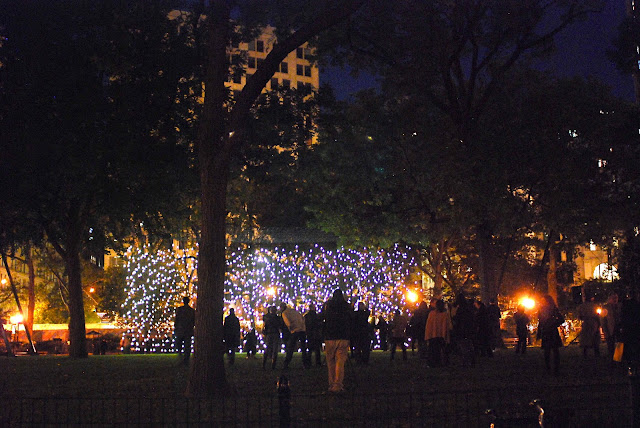 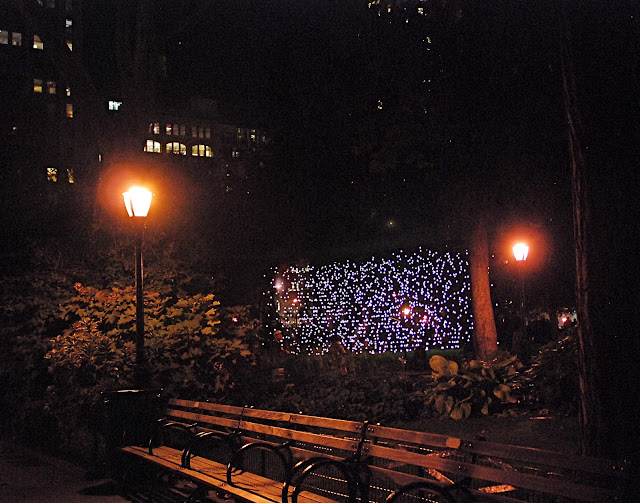 From http://www.nycgovparks.org/art and https://www.madisonsquarepark.org
With "Scattered Light," Campbell has hung nearly 2,000 LED lights, encased in standard light-bulb casings, from a massive suspension truss standing 20 feet high and stretching 80 feet down the center of the Oval Lawn. These LEDs have been programmed and sequenced by Campbell to turn and off in such a way that from the pathways of Madison Square Park—and from the major avenues beyond the park’s boundaries—it will appear as though the shadows of people and animals are passing across a massive, gently-undulating amorphous field of light.
Jim Campbell was born in 1956 in Chicago and educated at M.I.T., earning degrees in Electrical Engineering and Mathematics. A former Silicon Valley engineer, Campbell has emerged as one of the preeminent new media artists of this generation, inspired by 1970s research conducted by Bell Labs on low-resolution imagery and cognitive thresholds for accurate perception. Pixilated digital imagery has since become the lingua franca of contemporary visual culture and communication thanks to digital technology’s transformation of the way our society creates, shares and preserves images. Campbell’s art reduces both static and moving imagery to its barest essence—the pixels that serve as the elementary building blocks of so much of what we see—and poeticizes it, creating a space of exchange between artwork and viewer in which the human brain provides context and meaning to meticulously ordered and animated fragments of light. Campbell’s work is included the collections of institutions such as the Metropolitan Museum of Art, New York; The Museum of Modern Art, New York; The Smithsonian Museum of American Art, Washington, DC; The Whitney Museum of American Art, New York; the San Francisco Museum of Modern Art. He is the honored recipient of various public art commissions and awards including a Guggenheim Fellowship Award, Langlois Foundation Grant, and a Rockefeller Fellowship Award in Multimedia, among others. As an engineer, Campbell holds more than a dozen patents in the field of video image processing. His monograph Material Light was published by Hatje Cantz in 2010. Jim Campbell lives and works in San Francisco and is represented by Hosfelt, San Francisco and Bryce Wolkowitz Gallery, New York.
Posted by Noel Y. C. at 9:25 PM

I did not know about this. I work nearby and so maybe I'll stop by to see this!

I was passing by in a taxi and I saw the installation. I thought it was decoration so thanks for the information, I will now have to check it out.