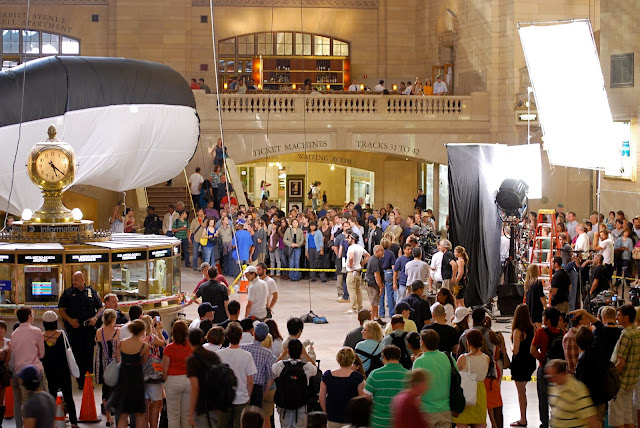 Photo taken in July 2009 during the filming of "Step-Up 3D" at Grand Central Terminal.
This photo is not related to the Scavenger Hunt.
Next weekend, Beneath the Earth Film Festival is taking New Yorkers on a weekend-long scavenger hunt where they’re challenged to recreate seven famous scenes from movies shot in New York.  Hollywood’s had quite a romance with New York City with literally hundreds of films having been filmed here.  Walking around the City on any given day, it’s easy to find yourself taking a stroll down movie memory lane like passing by the New York Public Library on 5th Avenue where the Ghostbusters encountered their first ghost!
The challenge: Our hunt’s going to test NYers’ movie knowledge and their photo taking chops. Participants are challenged with deciphering clues that lead them to the location of seven different iconic film scenes shot in NYC.  They’ll have to give their best reenactment of those iconic scenes through pictures, then submit those photos to our website! For all their effort, one lucky winner and their friend will walk away with an iPad complete with an iTunes gift certificate so they can fill it with their favorite flicks.
Posted by Noel Y. C. at 5:30 PM

This sounds so cool! I can't wait to see the outcome.