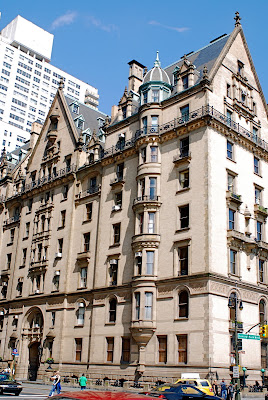 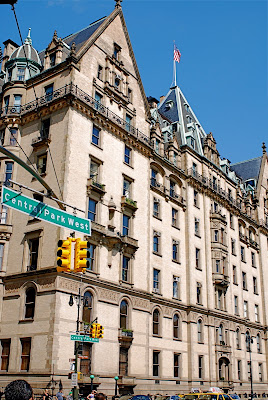 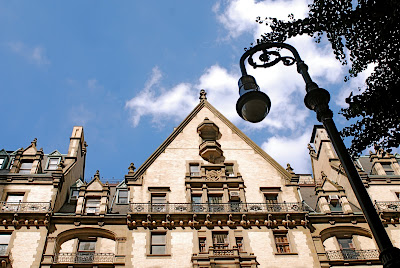 The building has high gables and deep roofs with a profusion of dormers, terracotta spandrels and panels, niches, balconies and balustrades giving it a North German Renaissance character. 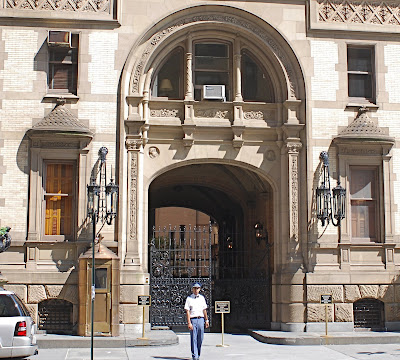 The Dakota's entrance where former Beatle John Lennon was shot on December 8, 1980 by Mark David Chapman. As of 2009, Lennon's wife, Yoko Ono still has an apartment in the building. 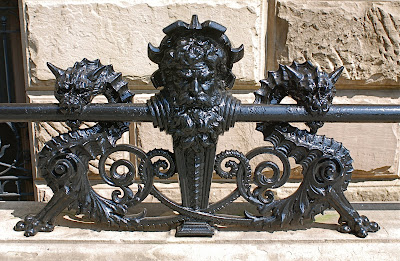 Detail of the Iron Fence 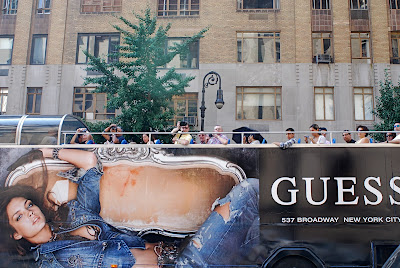 Tourists snapping pictures of The Dakota from a double decker tourist bus
One of the most popular tourist attraction on the Upper Westside of Manhattan is The Dakota, an apartment building located in the northwest corner of 72nd Street and Central Park West. I took these photos of the historic building earlier this morning on my way to Central Park.
From wikipedia:
The architectural firm of Henry Janeway Hardenbergh was commissioned to do the design for Edward Clark, head of the Singer Sewing Machine Company. The firm also designed the Plaza Hotel. The building's high gables and deep roofs with a profusion of dormers, terracotta spandrels and panels, niches, balconies and balustrades give it a North German Renaissance character, an echo of a Hanseatic townhall. Nevertheless, its layout and floor plan betray a strong influence of French architectural trends in housing design that had become known in New York in the 1870s. According to popular legend, the Dakota was so named because at the time it was built, the Upper West Side of Manhattan was sparsely inhabited and considered as remote as the Dakota Territory. However, the earliest recorded appearance of this account is in a 1933 newspaper story. It is more likely that the building was named "The Dakota" because of Clark's fondness for the names of the new western states and territories. High above the 72nd Street entrance, the figure of a Dakota Indian keeps watch. The Dakota was added to the National Register of Historic Places in 1972, and was declared a National Historic Landmark in 1976. The Dakota is built in a square-shape around a central courtyard, accessible through the arched passage of the main entrance, a porte cochère large enough that horse-drawn carriages could pass through, letting their passengers disembark sheltered from the weather. In the Dakota multi-story stable building at 72nd Street and Amsterdam Avenue, elevators lifted carriages to upper floors. The "Dakota Stables" building was still in operation as a garage until February 2007, but it is now slated to be developed by the Related Companies into a multimillion dollar condominium project. The general layout of the apartments is also in the French style of the period, with all major rooms not only connected to each other en filade in the traditional way, but also accessible from a hall or corridor, an arrangement that allowed a natural migration for guests from one room to another, especially on festive occasions, yet gave service staff discreet separate circulation patterns that offered service access to the main rooms. The principal rooms, such as parlors or the master bedroom, face the street, while the dining room, kitchen, and other auxiliary rooms are oriented towards the courtyard. Apartments are thus aired from two sides, which was a relative novelty in New York at the time. (In the Stuyvesant building, which was built in 1869, a mere ten years earlier, and which is considered New York's first apartment building in the French style, many apartments have windows to one side only.) Some of the drawing rooms were 49 ft (15 m) long, and many of the ceilings are 14 ft (4.3 m) high; the floors are inlaid with mahogany, oak, and cherry (although in the apartment of Clark, the building's founder, some floors were famously inlaid with sterling silver). Originally, the Dakota had 65 apartments with four to twenty rooms, no two alike. These apartments are accessed by staircases and elevators placed in the four corners of the courtyard. Separate service stairs and elevators serving the kitchens are located in mid-block. Built to cater for the well-to-do, the Dakota featured many amenities and a modern infrastructure that was exceptional for the time. The building has a large dining hall; meals could also be sent up to the apartments by dumbwaiters. Electricity was generated by an in-house power plant, and the building has central heating. Besides servants' quarters, there was a playroom and a gymnasium under the roof. (In later years, these spaces on the tenth floor were—for economic reasons—converted into apartments, too.) The lot of the Dakota also comprised a garden and private croquet lawns and a tennis court behind the building between 72nd and 73rd Streets.
In several movies, the exterior of the Dakota has been featured including Rosemary's Baby directed by Roman Polanski, and Vanilla Sky, directed by Cameron Crowe.
Posted by Noel Y. C. at 6:49 PM