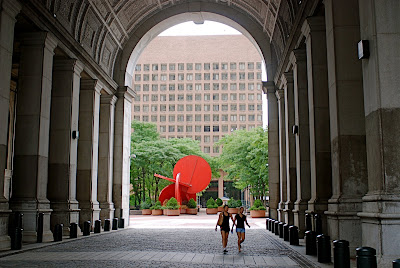 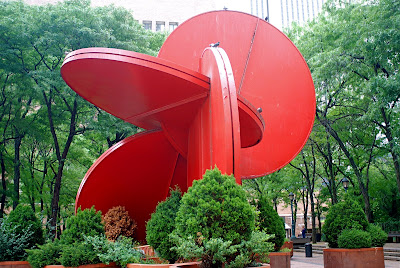 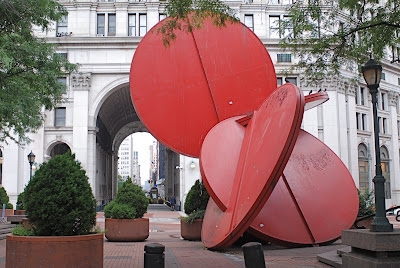 Installed at One Police Plaza in downtown Manhattan is "5 in 1", a red painted CorTen steel sculpture by TONY ROSENTHAL. The disc interiors of "5 in 1", 1973-74, are made with square steel tubing. The piece measures 35 x 28 x 42 feet. The project was organized by the architectural firm, Gruzen & Partners, and the landscape architect, M. Paul Friedberg.
Mr. Rosenthal, sculptor of public art died last month of stroke at the age of 94. He created the "Alamo", the popular revolving black cube in Astor Place in the East Village. His works of public sculpture are installed in Manhattan, Los Angeles, Philadelphia and other cities.Click here for Mr. Rosenthal's website.
From the New York Times:
Mr. Rosenthal is also represented in Manhattan by “Rondo” (1969), the gleaming bronze circle in front of the New York Public Library’s branch on East 58th Street; “5 in 1” (1973) at Police Plaza; “SteelPark” (1980) at 80th Street near First Avenue; and “Hammarskjold,” originally installed at Hammarskjold Plaza in 1977 but acquired the next year by the Fashion Institute of Technology on Seventh Avenue at 27th Street.
Posted by Noel Y. C. at 5:27 AM

Email ThisBlogThis!Share to TwitterShare to FacebookShare to Pinterest
Labels: 5 in 1, Art in Steel Award, Tony Rosenthal

Taiwan's flooding caused by the disaster, let us love to play together to help those in need of help, and now you need to do is click on any one keyword for each link will be sponsored by the NT one dollar, let us work together to create world peace ~ thank you!