All Seriousness Aside: 2012 Presidential Gum Election and the Annual Al Smith Dinner at the Waldorf Astoria Hotel 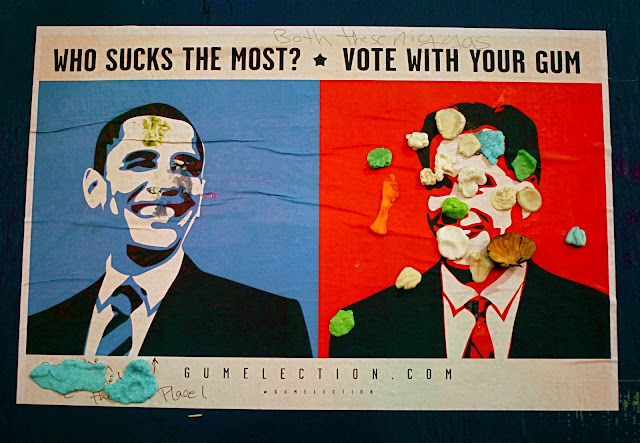 This poster from Gum Election was spotted near Herald Square in midtown Manhattan. According to its website, Gum Election is a $15 street art project by Stefan Haverkamp and James Cooper. The purpose of the idea was to encourage people to vote on Election Day as well as keeping the city a little cleaner.


A few days ago, Gov. Mitt Romney and President Barack Obama attended the annual Al Smith Dinner at the Waldorf Astoria Hotel. During presidential election years, the event brings the candidates to the same stage to trade barbs and self-deprecating one-liners as the race enter its final weeks. The white-tie affair raises millions for the Gov. Alfred E. Smith Memorial Foundation and is organized by the Catholic Archdiocese of New York to benefit needy children.
Posted by Noel Y. C. at 6:34 PM