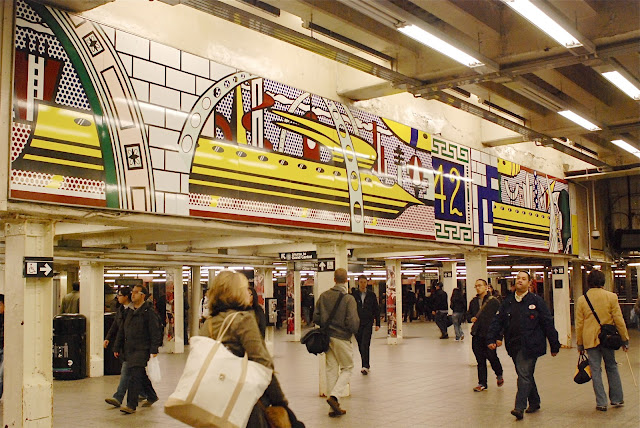 Roy Lichtenstein created this mural called "Times Square Mural" made of porcelain enamel on a wall of the Time Square station (N, Q, R, S, W, 1, 2, 3 mezzanine). The 6-foot-high, 53-foot-long mural revisits the history of New York transportation, and captures the spirit of the subway, with its linear movement and dynamic energy. The central image is a futuristic bullet shaped car, resembling a winged spaceship zipping through an underground station. The first panel shows a portion of an arch made of tile and masonry, the materials of the 1904 subway. The second arch is made of steel, representing the Machine Age of the 1930's. The 42 image takes its inspiration from the architectural detail of the subway.
Posted by Noel Y. C. at 5:44 PM