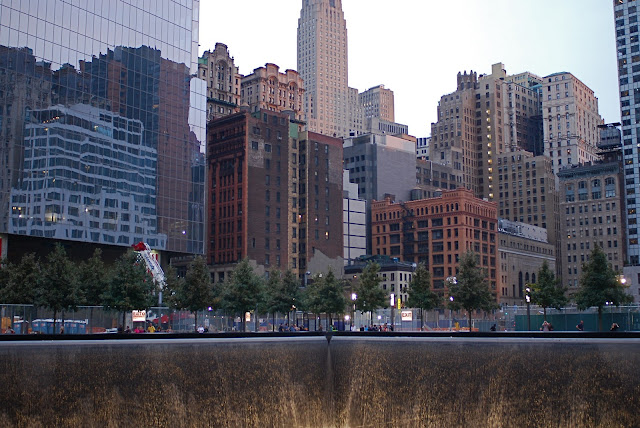 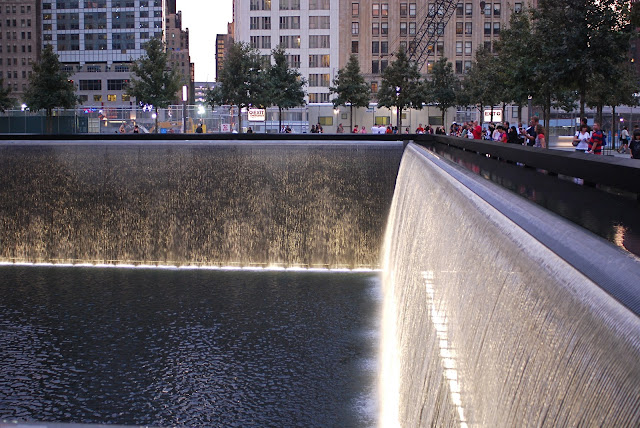 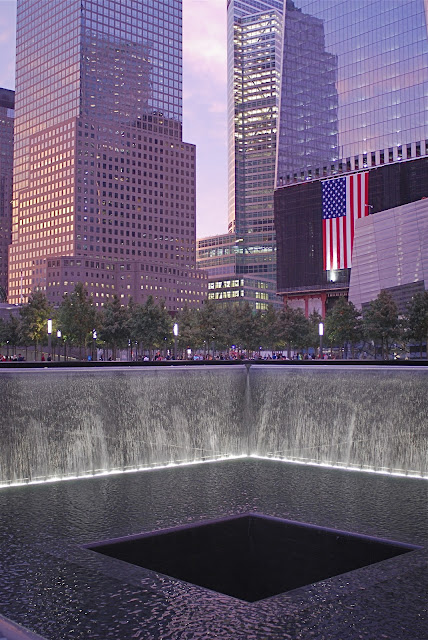 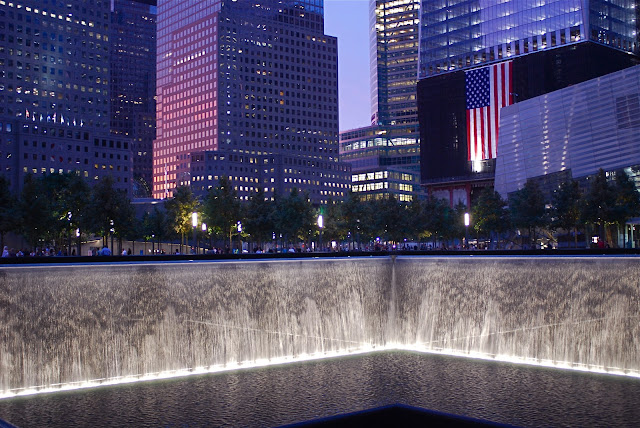 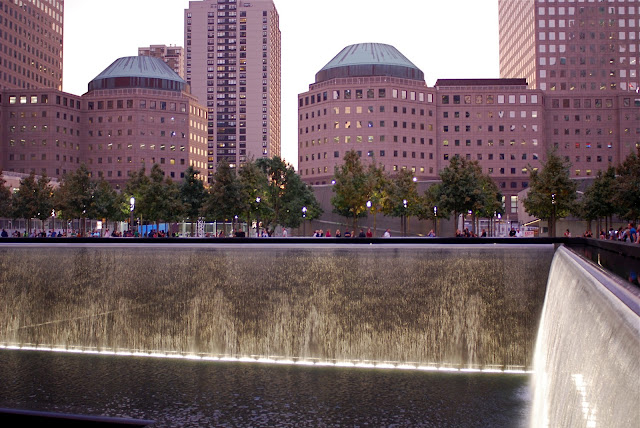 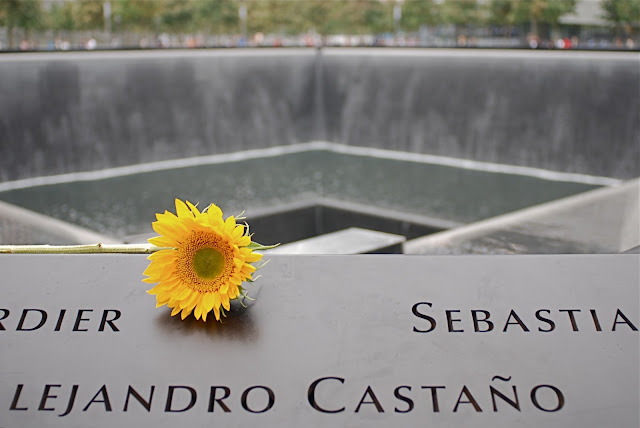 Daytime image of the pool 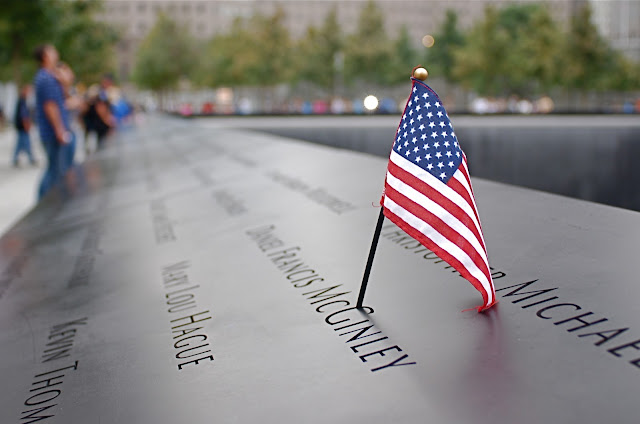 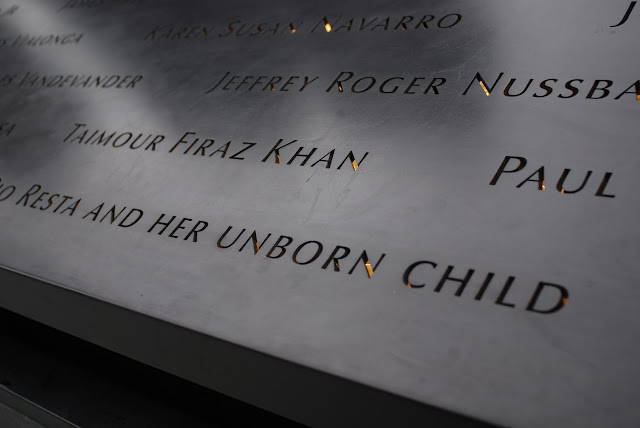 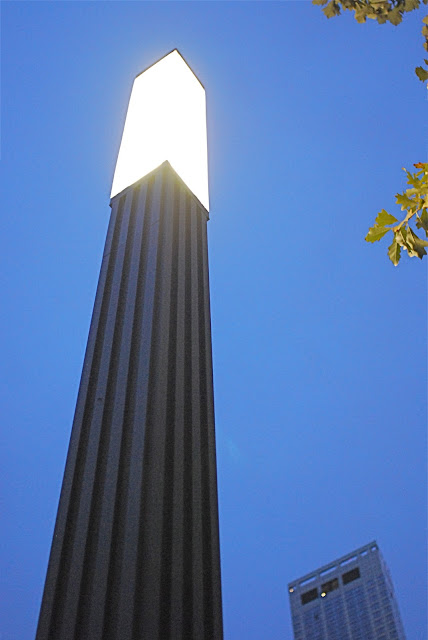 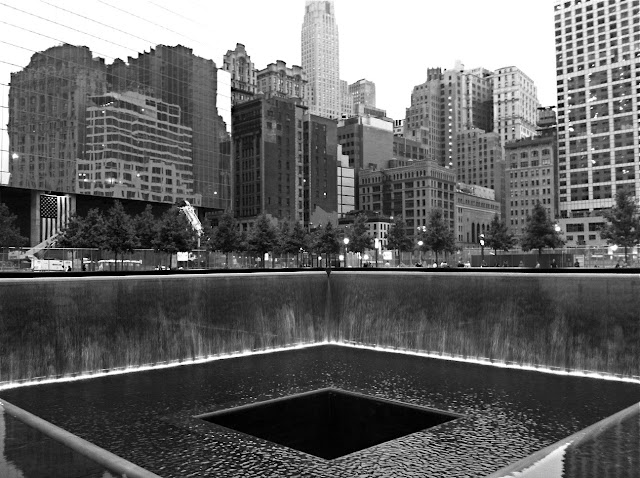 video (from IsraeliPM) of NYC Mayor Michael Bloomberg showing Israel Prime Minister the 9/11 Memorial
The National September 11 Memorial or 9/11 Memorial opened to the public last September 12. The memorial is a tribute of remembrance and honor to the nearly 3,000 people killed in the terror attacks of September 11, 2001 at the World Trade Center site, near Shanksville, Pa., and at the Pentagon, as well as the six people killed in the World Trade Center bombing in February 1993.


The Memorial’s twin reflecting pools are each nearly an acre in size and feature the largest manmade waterfalls in the North America. The pools sit within the footprints where the Twin Towers once stood. Architect Michael Arad and landscape architect Peter Walker created the Memorial design selected from a global design competition that included more than 5,200 entries from 63 nations.


The names of every person who died in the 2001 and 1993 attacks are inscribed into bronze panels edging the Memorial pools, a powerful reminder of the largest loss of life resulting from a foreign attack on American soil and the greatest single loss of rescue personnel in American history.
The photos of the memorial were taken yesterday, September 24, 2011.

To visit the 9/11 Memorial, free advance passes are required and are available through the Memorial's online reservation system (see website below). A limited number of passes for same day visits are also available daily at the 9/11 Memorial Preview Site at 20 Vesey St (at Church St.) beginning at 9:00 AM, the NYC & Co. kiosk at City Hall and the NY Water Taxi booth at the South Street Seaport (limited to 4 passes per person on a first-come, first-served basis).

Thank you for posting your photos. I had been looking for a photo of the Survivor Tree at the completed Memorial - for some reason this seems to be a rare photo, most people are only posting photos of the pools.

Love all your photographs!
Would you mind if I used the Survivor Tree in a piece of art I am making? It is a collage piece of 9/11 Memorial and a man who died that day. It will be a multi-media piece and I can tag your name to the art tag.

Hi Caroline,
You can use the Survivor Tree photo in you collage.
Good luck!

The pool being 1 mile or close to below, what's to keep the loved ones from jumping to their deaths, they should have used 40 inch thick glass 5 feet deep but keep the depth so their loved ones can re coop and the ones that died can smile back at them