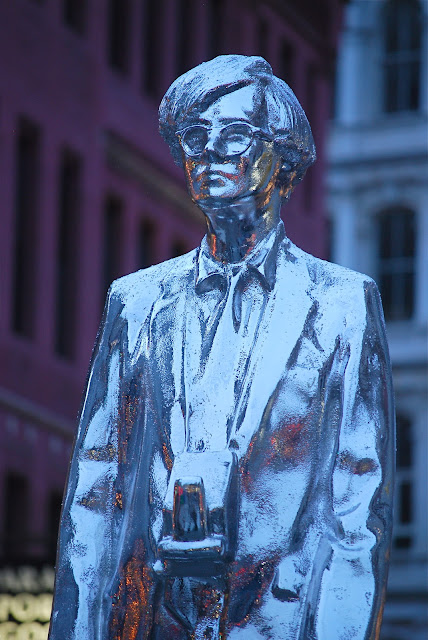 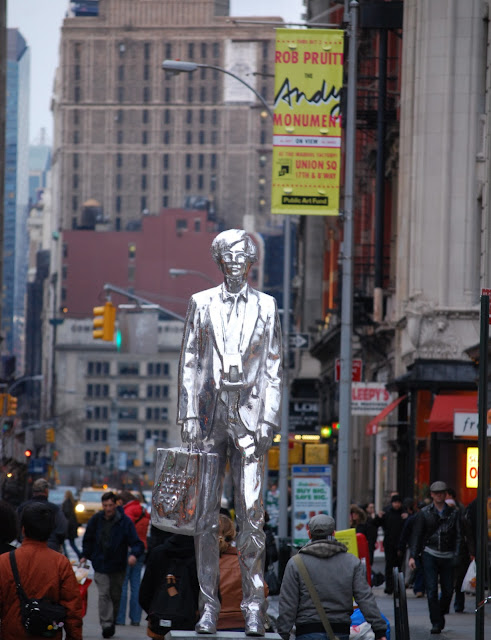 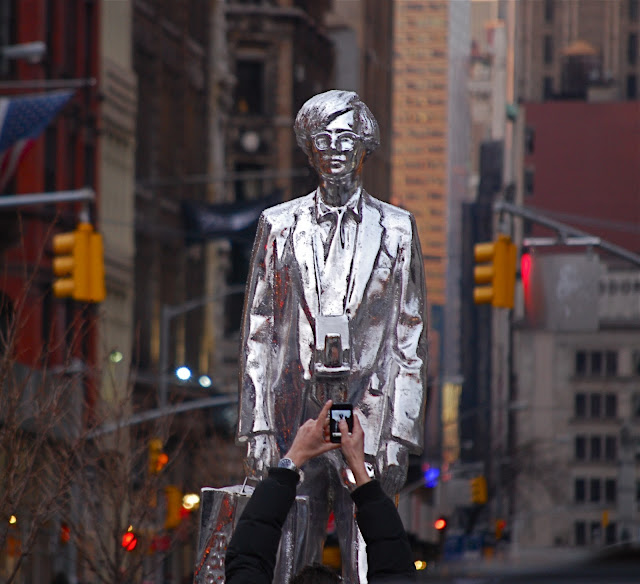 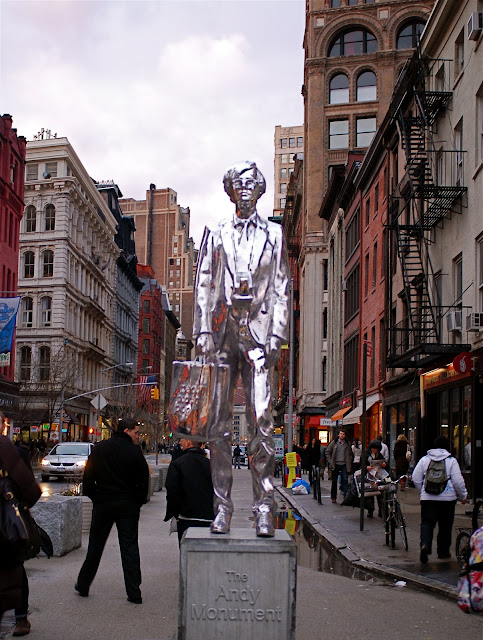 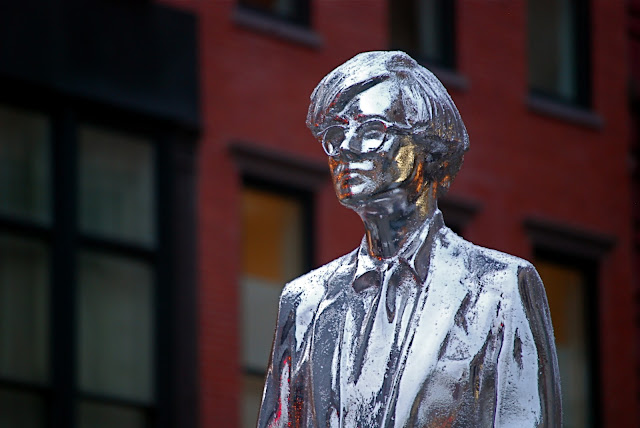 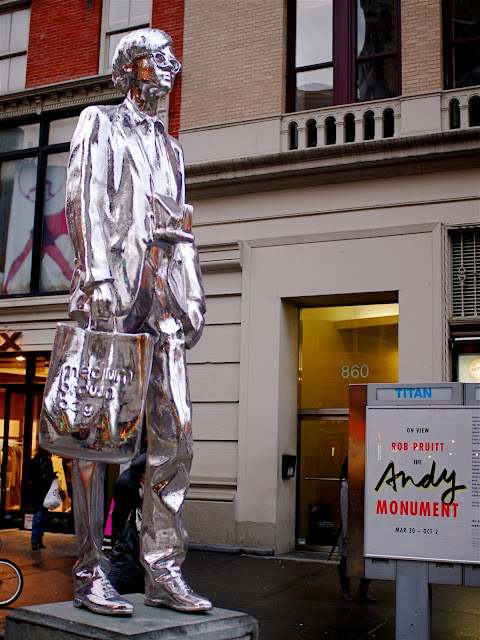 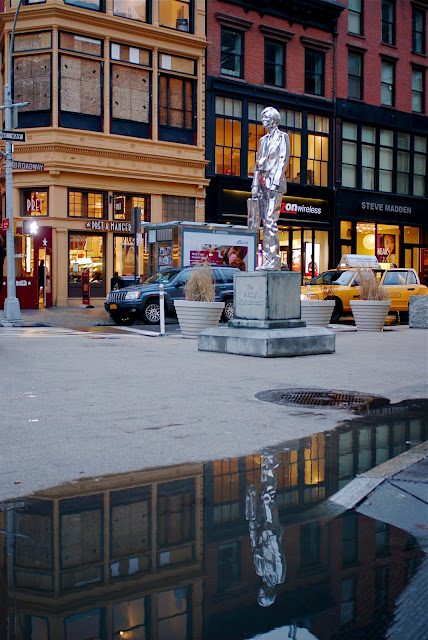 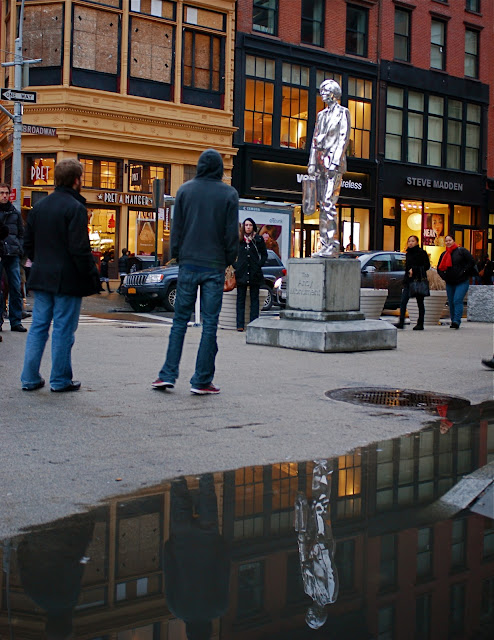 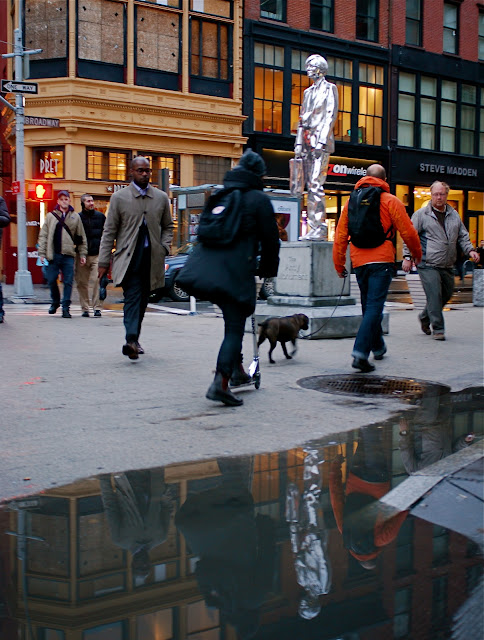 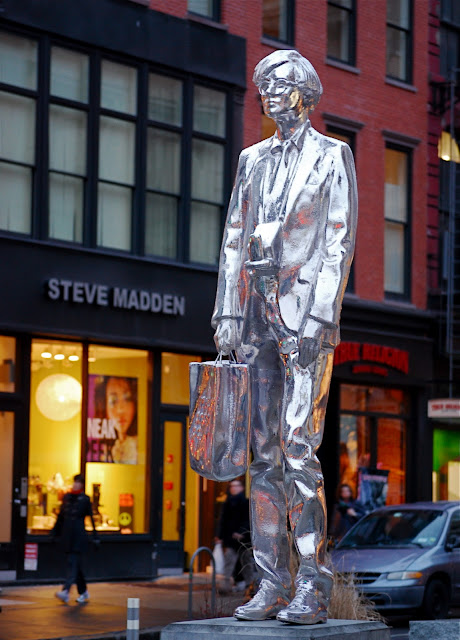 Union Square has a new public art installation - a sculpture of the father of Pop Art, ANDY WARHOL. Created by artist ROB PRUITT, the piece called The Andy Monument was unveiled yesterday at the northwest corner of Union Square, just outside the building that used to be Warhol's "Factory" for more than ten years in the early 1970s and early 1980s. The sculpture will remain in Union Square until October 2, 2011. Earlier this, evening, I made these pictures of the 10-foot tall, chrome-finished sculpture of one of New York City's enduring cultural icons.
From Public Art Fund
Union Square is one of New York City’s most active social, cultural, and commercial centers. It is home to many well-known monuments, including statues of George Washington and Mahatma Gandhi. From 1968 to 1984 it was the location of Andy Warhol’s Factory, where he and his collaborators reinvented the conventional artist’s studio, producing silkscreen paintings, films, music, books, magazines, and more. With his Union Square Factory as a creative hub, Warhol became synonymous with the Downtown art scene.
Inspired by Warhol’s art and life, Rob Pruitt (b. 1964, Washington DC) created The Andy Monument as a tribute to the late artist. It stands on the street corner, just as Warhol did when he signed and gave away copies of Interview magazine. Pruitt’s sculpture adapts and transforms the familiar tradition of classical statuary. The figure is based on a combination of digital scanning of a live model and hand sculpting, its surface finished in chrome, mounted on a concrete pedestal. It depicts Warhol as a ghostly, silver presence: a potent cultural force as both artist and self-created myth. As Rob Pruitt observes, “Like so many other artists and performers and people who don’t fit in because they’re gay or otherwise different, Andy moved here to become who he was, to fulfill his dreams and make it big. He still represents that courage and that possibility. That’s why I came to New York, and that’s what my Andy Monument is about.”

video from jameskalmroughcut
Posted by Noel Y. C. at 7:16 PM

I so love New York. Your blog helps us culturally deprived folks out in the hinterland survive the long cold summers. Thank you!