Bauhaus 1919–1933: Workshops for Modernity at the Museum of Modern Art 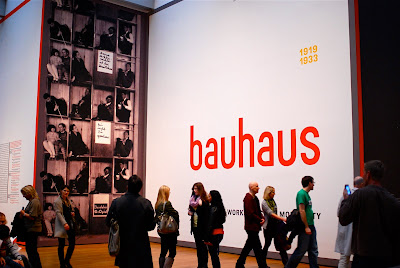 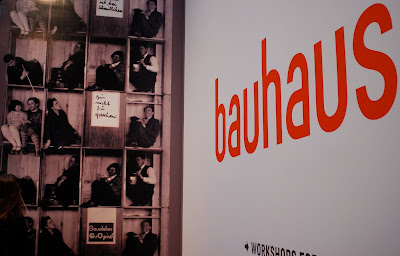 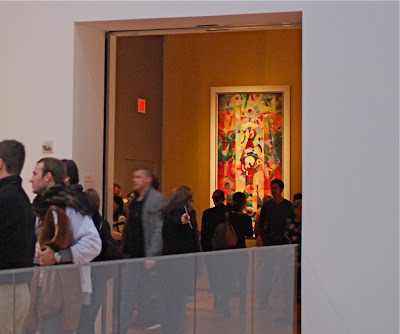 Entrance to the exhibit hall with a painting by JOHANNES ITTEN
A special exhibition about BAUHAUS opened last week at the Museum of Modern Art. Bauhaus ("House of Building") was a famous and influential avant-garde art school in Germany that operated from 1919-1933. I made these images when I viewed the exhibit which runs through January 25.
From the MOMA website:

This survey is MoMA’s first major exhibition since 1938 on the subject of this famous and influential school of avant-garde art. Founded in 1919 and shut down by the Nazis in 1933, the Bauhaus brought together artists, architects, and designers in an extraordinary conversation about the nature of art in the age of technology. Aiming to rethink the very form of modern life, the Bauhaus became the site of a dazzling array of experiments in the visual arts that have profoundly shaped our visual world today.   The exhibition gathers over four hundred works that reflect the broad range of the school’s productions, including industrial design, furniture, architecture, graphics, photography, textiles, ceramics, theater design, painting, and sculpture, many of which have never before been exhibited in the United States. It includes not only works by the school’s famous faculty and best-known students—including Anni Albers, Josef Albers, Herbert Bayer, Marianne Brandt, Marcel Breuer, Lyonel Feininger, Walter Gropius, Vasily Kandinsky, Paul Klee, László Moholy-Nagy, Lucia Moholy, Lilly Reich, Oskar Schlemmer, and Gunta Stölzl—but also a broad range of works by innovative but less well-known students, suggesting the collective nature of ideas.