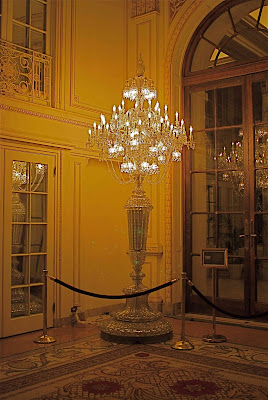 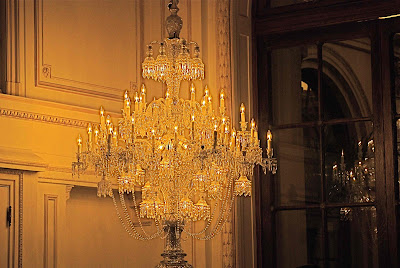 On display at the main lobby of THE PLAZA is a grand candelabra for sale. THE PLAZA hotel/private residences is located at the corner of Fifth Avenue and Central Park South.
At the turn of the 19th century, Russian Tsar Nicholas II wanted to show the world the grandeur and modernity of his empire. In 1896, during a visit to Paris, he discovered the glittering world of Baccarat. The Tsar went on to commission several Baccarat candelabra. Unfortunately, World War I and the ensuing Russian Revolution prevented some of these majestic 79-light candelabra from ever reaching their final destination. This masterpiece, one of two remaining candelabra was one of the highlights at the 1909 "Exposition Universelle de Nancy" and has since been known as the "Candelabra du Tsar." The other is currently on permanent display at the Baccarat Gallery Museum in Paris. This unique piece is for sale with a substantial portion of the proceeds to benefit the US Fund for UNICEF. For information, please call 212-826-4100.
Posted by Noel Y. C. at 5:30 PM