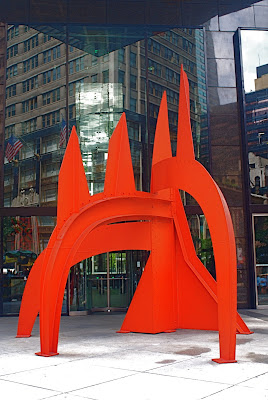 This is Alexander Calder's sculpture called “Saurien.” A bright orange stabile from 1975, this piece is spectacularly placed underneath the cantilevered corner of a skyscraper on the corner of 57th Street and Madison Avenue.
Born in Philadelphia in 1898, Alexander Calder was the second child of artist parents. His father, sculptor Alexander Stirling Calder, received a number of public commissions and so, throughout Calder's childhood, the family traveled often. Calder studied to become an engineer, but in his early twenties decided to pursue a career as an artist. He began by developing a new method of sculpting: by bending and twisting wire, he essentially "drew" three-dimensional figures in space. He lived in Paris from 1926 to 1933, where he created his famous Cirque Calder and had his first solo gallery shows. In 1933, Calder and his wife, Louisa, moved to Roxbury, Connecticut, where he continued to live and work for the rest of his life. His shift toward abstraction, inspired by a visit to Piet Mondrian's studio in 1930, resulted in his invention of mobiles and stabiles, two bodies of work that he continued to develop in scale. Calder's many permanent public sculptures - in Chicago, Paris, Mexico City, Montreal, Jerusalem, and other cities all over the world - are some of the most beloved and important works of the 20th century.
Posted by Noel Y. C. at 4:50 PM