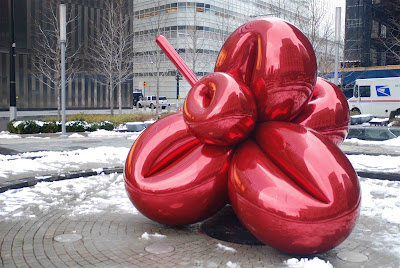 Outside the new 7 World Trade Center is a small plaza where a striking sculpture is located. It's called BALLOON FLOWER (Red) by internationally acclaimed artist, JEFF KOONS. Overlooking Ground Zero, the art installation is located in a park bounded by Greenwich Street, Vesey Street and West Broadway. The Balloon Flower consists of seven elements: six large blossom- or balloon-like shapes of various sizes, and one bar that can be taken as a flower stem. They are all aglow in bright red, so that they can see themselves and the world around them reflected. It's been said that the true appeal of the Balloon Flower is that it attracts people to look at it, and then reflects them back at themselves.

Jeff Koons was born in York, Pennsylvania. As a young man, Koons revered Salvador Dalí. Koons attended the School of the Art Institute of Chicago and the Maryland Institute College of Art, and studied painting. After college he worked as a Wall Street commodities broker, while establishing himself as an artist. He gained recognition in the 1980s, and subsequently set up a factory-like studio in a SoHo loft on the corner of Houston and Broadway in New York. This had over 30 staff, each assigned to a different aspect of producing his work—in a similar mode to both Andy Warhol's Factory and many Renaissance artists. Last year, his art piece "Hanging Heart" sold at Sotheby's auction house for $23.6 million becoming the most expensive piece by a living artist ever auctioned. It was bought by the Gagosian Gallery which also purchased another Koons sculpture entitled "Diamond (Blue)" for $11.8 million from Christie's auction house.
Posted by Noel Y. C. at 6:47 PM

i love it, gonna check it out