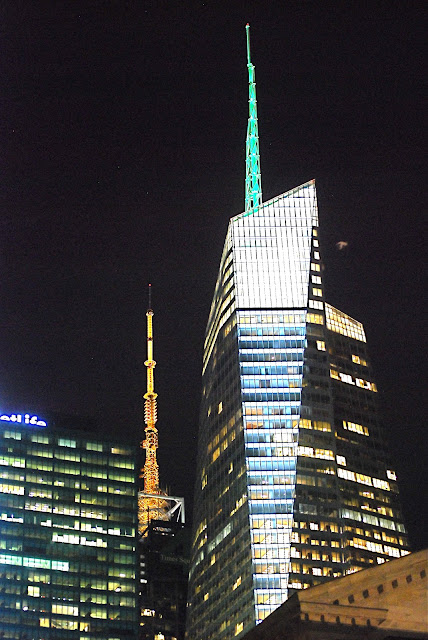 The lighting of the The Bank of America Tower at One Bryant Park (green) and the Conde Nast Building at 4 Times Square (yellow) provides a stunning night imagery on midtown's skyline. The two towers are often lit up in identical or complementary colors at night.

“The idea is that the two of them can work in sync. They can talk to each other,” said Michael Hennes, a senior associate ofCline Bettridge Bernstein Lighting Design.

The spire atop the 4 Times Square building (also known as the Conde Nast building,) is a powerful broadcast antennae while the One Bryant Park light is purely decorative, Hennes said. The two spires are connected underground via ethernet and controlled from One Bryant Park, he said.

The 51-story One Bryant Park tower became the city’s second-tallest building when it was completed in 2010. It’s 1,198 feet tall, including the 253-foot spire, according to the building’s specifications compiled by Durst. Certified LEEDPlatinum, the office tower is home to many of Bank of America’s corporate operations as well as the corporate headquarters of the Durst Organization, which developed the skyscraper.
Posted by Noel Y. C. at 12:49 PM