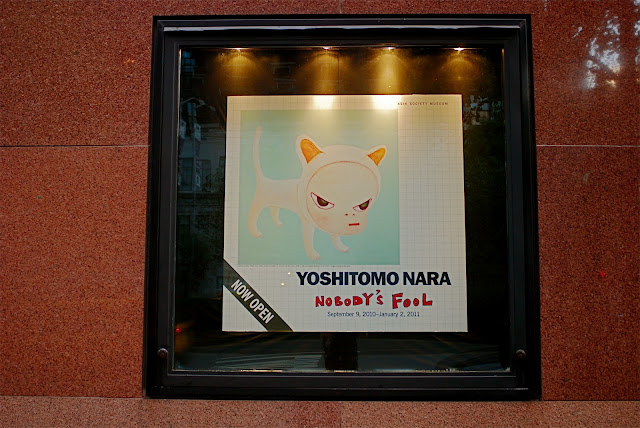 video from the Asia Society
Yoshitomo Nara: Nobody's Fool is an ongoing exhibit at the Asia Society Museum, which is located on Park Avenue and 70th Street. Nara is a Japanese artist (born 1959) who is well known for his depiction of children and animals that are associated with pop culture, particularly manga comics and animation. His work is characterized by depiction of feelings of helplessness and rage, and a sense of isolation. The exhibit runs through January 2, 2011. In conjunction with the exhibit at Asia Society, Nara's huge sculptures called "White Ghost" are also installed in two locations on Park Avenue, one in front of the Asia Society, and another one near the Park Avenue Armory. Click here for my previous post on the "White Ghost" installation.

The Asia Society is the leading museum in presenting contemporary Asian and Asian-American art. It was founded in 1956 by John D. Rockefeller III to increase understanding between Americans and Asians through art exhibits, lectures, films, performances, and international conferences.
Posted by Noel Y. C. at 4:58 AM