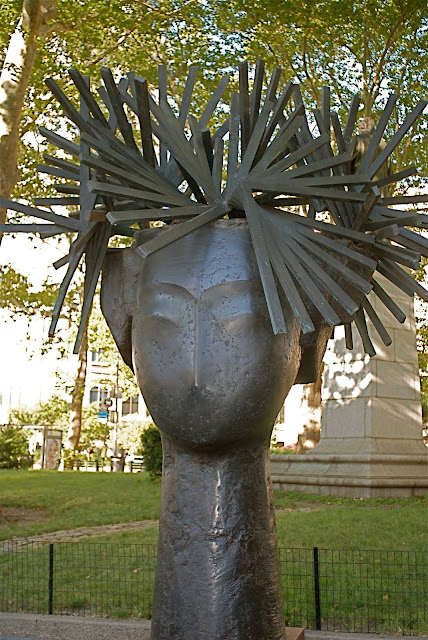 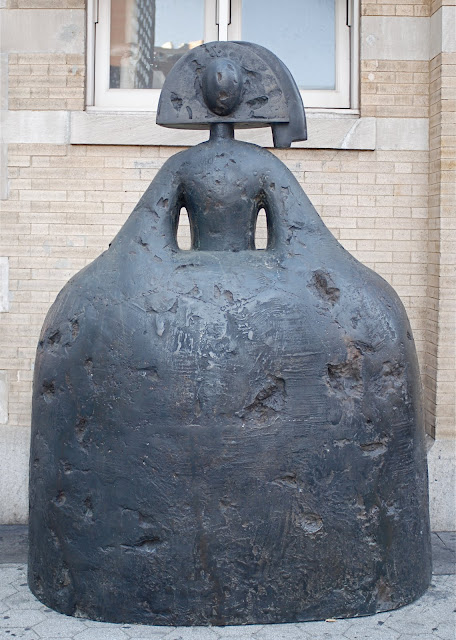 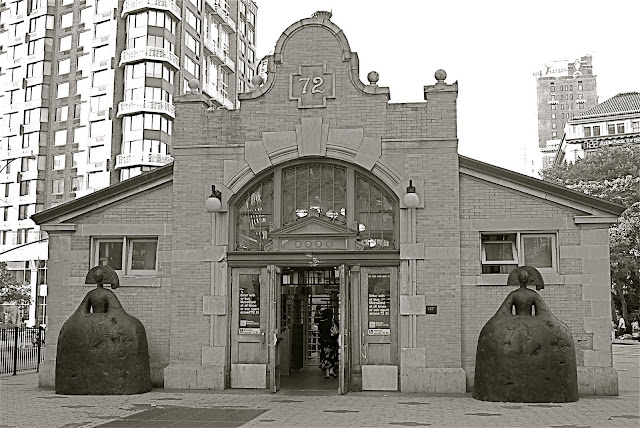 Sixteen bronze sculptures by MANOLO VALDES are currently on display along Broadway from Columbus Circle to 166th Street. Shown above are Dama II (2003) at Dante Park at 63rd Street and Reina Mariana (2005) at the south entrance to the 72nd Street subway station. The sculptures will be on exhibit until January 23, 2011.
From nycgovparks.org:
Manolo Valdes is one of the most important and respected Spanish artists working today. Best known for his passion for past masters from Zurbaran to Velazquez, Matisse to Lichtenstein, Valdes uses their work "as a pretext" ("como pretexto") to create an entirely new aesthetic object. For example, six massive sculptures entitled Reina Mariana, each over eight feet in height and weighing over two thousand pounds, depict Queen Mariana as immortalized by Velazquez. Four of these sculptures with their abstract and simplified forms will grace the famous city landmark, Columbus Circle, as well as two at the south entrance to the 72nd Street subway station. Also sited at the subway station is Odalisca, 2006, a sculpture whose subtle forms refer to works of Henri Matisse and Pablo Picasso. Another highlight of the exhibition is the series of six monumental bronzes – all over 12 feet in height – depicting female heads, their calm facial composure and structured equilibrium offset rhythmically by dynamic ornamental head-pieces. The exhibition will also include the New York debut of Valdes' two equestrian sculptures Dama a caballo V, 2008 and Caballero V, 2008, which were inspired by Velazquez's seventeenth-century portraits.
Posted by Noel Y. C. at 6:16 PM

May I have permission to re-post two of these photos and an excerpt from your text on Print Magazine's IMPRINT blog?
http://imprint.printmag.com/
The post will be titled "Say Yes To The Dress," and it's about various re-interpretations of "Las Meninas" from Picasso to Barcelona street graffiti to 72nd St Subway Station.