Beauty Queen VS. Queen of All Media 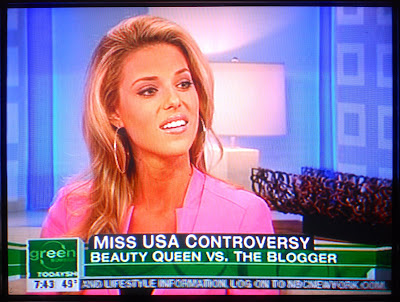 Visit msnbc.com for Breaking News, World News, and News about the Economy

In this morning’s The TODAY Show on NBC, celebrity blogger and Miss USA 2009 judge Perez Hilton and Miss California Carrie Prejean discussed the latter's controversial response to the judge's same-sex marriage question at this weekend’s Miss USA pageant in Las Vegas.
Ms. Prejean insisted that her politically incorrect answer, proclaiming that marriage is between a man and a woman, “cost her the crown,” she told Matt Lauer that she “wouldn’t change a thing.”
“No, I would not have answered it differently. I said no offense to anybody, but with that question specifically, it was not about being politically correct. For me it was about being biblically correct.”
“I am so proud of myself,” Carrie said.
Perez Hilton, the openly gay judge who asked the question during competition, participated in the discussion via Skype. Hilton, the self-proclaimed "queen of all media," eloquently argued that Miss California alienated many Americans with her anti-gay marriage response—because Miss USA is supposed to represent all Americans.
Do you side with the beauty queen, or the self-proclaimed "queen of all media?"
Posted by Noel Y. C. at 5:21 PM