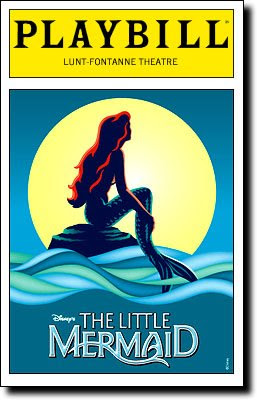 We recently caught a performance of Disney's "The Little Mermaid" on Broadway at the Lunt-Fontane Theater.
Below is Ben Brantley's review of the musical (New York Times):
Fish Out of Water in the Deep Blue Sea
Loved the shoes. Loathed the show. O.K., I exaggerate. I didn’t like the shoes all that much. But the wheel-heeled footwear known as merblades, which allow stage-bound dancers to simulate gliding underwater, provides the only remotely graceful elements in the musical blunderbuss called “Disney’s The Little Mermaid,” which opened on Thursday at the Lunt-Fontanne Theater.
A variation on Heelys, a skate hybrid popular among schoolchildren and teenagers who are probably way too old for this production, merblades endow their wearers with the ability to skim hard surfaces with a near-balletic lightness. Unfortunately, a state of lightness is difficult to sustain when you’re being attacked on all sides by an aggressive ocean that appears to be made of hard plastic.
The get-out-of-my-way water, which periodically slides in like so many push-button car windows, is only one of the obstructions to be wrestled with by the cast members playing fish, seabirds and merfolk in Disney’s charm-free $15 million adaptation of its charming 1989 animated movie of the same title.
Directed by Francesca Zambello, this “Little Mermaid” burdens its performers with ungainly guess-what-I-am costumes (by Tatiana Noginova) and a distracting set (by George Tsypin) awash in pastels gone sour and unidentifiable giant tchotchkes that suggest a Luau Lounge whipped up by an acid-head heiress in the 1960s. The whole enterprise is soaked in that sparkly garishness that only a very young child — or possibly a tackiness-worshiping drag queen — might find pretty.
Come to think of it, the motto of this production, the latest and least of the Disney musicals to besiege Broadway since “Beauty and the Beast” opened in 1994, could be, “You can never go broke underestimating the taste of preschoolers.” In 1989 the film of “The Little Mermaid,” which signaled a renaissance in Disney animation and featured songs by the composer Alan Menken and the lyricist Howard Ashman that were regularly described as “Broadway-caliber,” was heralded as that rare fairy-tale cartoon that could be enjoyed just as much by grown-ups as by children. (Hey, I saw it three times.)
But in a perverse process of devolution “The Little Mermaid” arrives on Broadway stripped of the movie’s generation-crossing appeal. Coherence of plot, endearing quirks of character, even the melodious wit of the original score (supplemented by new, substandard songs by Mr. Menken and the lyricist Glenn Slater) have been swallowed by an unfocused spectacle, more parade than narrative, that achieves the dubious miracle of translating an animated cartoon into something that feels like less than two dimensions.
Inspired by the darker and more cautionary Hans Christian Andersen fairy tale, “The Little Mermaid” was Disney’s first animated film to feature a newly empowered breed of heroine who gets the prince but doesn’t need saving by him. In this case that’s Ariel (played here by Sierra Boggess), the title character, a princess of the deep who defies her mighty father, King Triton (Norm Lewis, underused and bare chested) to pursue the handsome Prince Eric (Sean Palmer), a nonmarine form of life, on land. To do so she must enlist the aid of Ursula (Sherie Rene Scott), the evil sea witch, who transforms Ariel’s fish tail into human legs — but at what price?
I’m not going to give you any more plot, because of limitations of space, but if you have any intention of seeing this musical, please rent the movie first, or you will be utterly, you know, at sea. Despite a new book by the Pulitzer Prize-winning playwright Doug Wright, the ending, with its war-of-the-elements climax, is incomprehensible. And though the film’s supporting sea creatures, both frolicsome and dastardly, from the film, are all on board, it’s hard to figure out here just who and what they’re supposed to be.
Sebastian (Tituss Burgess), the Jiminy Crickett-like crab who is Ariel’s scolding sidekick, retains his trademark Caribbean accent but looks more like a lobster than a crab in his tiered shell suit. Scuttle, the malapropism-prone sea gull, looks like one of the Lollipop Kids from “The Wizard of Oz,” except for that beak on his hat. Flotsam (Tyler Maynard) and Jetsam (Derrick Baskin), Ursula’s electric-eel henchmen, resemble revelers at Limelight, the departed New York dance club, on a dinosaur-theme night.
Posted by Noel Y. C. at 7:49 PM

Email ThisBlogThis!Share to TwitterShare to FacebookShare to Pinterest
Labels: The Little Mermaid