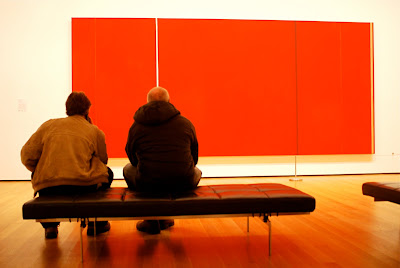 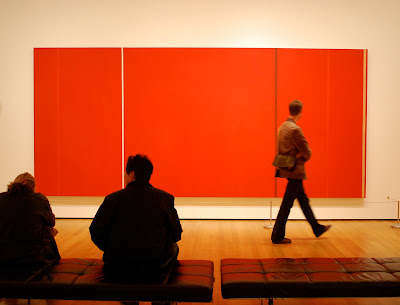 Part of the Museum of Modern Art's collection is this oil on canvas painting called VIR HEROICUS SUBLIMIS (1950-1951) by American painter  BARNETT NEWMAN (1905-1970).

From the gallery label text:

The Latin title of this painting can be translated as "Man, heroic and sublime." It refers to Newman’s essay "The Sublime is Now," in which he asks, "If we are living in a time without a legend that can be called sublime, how can we be creating sublime art?" His response is embodied in part by this painting—his largest ever at that time. Newman hoped that the viewer would stand close to this expansive work, and he likened the experience to a human encounter: "It's no different, really, from meeting another person. One has a reaction to the person physically. Also, there’s a metaphysical thing, and if a meeting of people is meaningful, it affects both their lives."