The Stonewall Inn - where PRIDE began 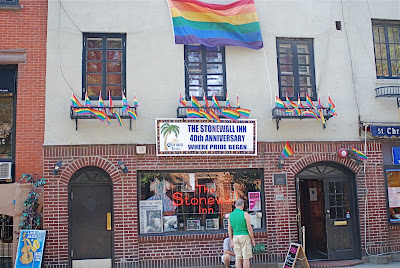 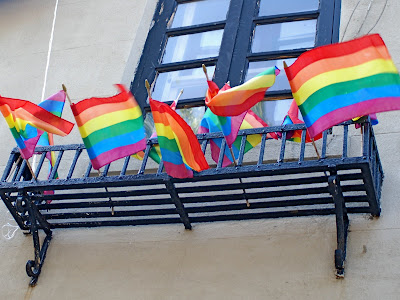 This is the newly renovated STONEWALL INN, the historic landmark of gay liberation on 53 Christopher Street in Greenwich Village. The photo was taken last Sunday. It is the birthplace of the Sonewall Riots during the last weekend of June of 1969. The Pride Parade last June 28 marked the 40th anniversary of the Stonewall Riots.
From http://www.stonewall-place.com:
The police and Alcoholic Beverage Control Board agents entered The Stonewall Inn allegedly to look for violations of the alcohol control laws. They made the usual homophobic comments and then, after checking identification, threw the patrons out of the bar, one by one. Instead of quietly slipping away into the night, as we had done for years, hustlers, drag queens, students and other patrons held their ground and fought back. Someone uprooted a parking meter and used it to barricade the door. The agents and police were trapped inside, They wrecked the place and called in reinforcements. Their vehicles raced to the scene with lights glaring and sirens blaring. The crowd grew. Someone set a fire. More people came. For three days, people protested. And for the first time, after innumerable years of oppression, the chant, Gay Power, rang out.
The symbol of gay pride is the Rainbow Flag, created by GILBERT BAKER, a friend of the late HARVEY MILK. in 1978. The flag debuted at the San Francisco Gay and Lesbian Freedom Day Parade. It has since been used around the world as a symbol of LGBT unity in many variations, including adaptations such as bumper stickers and decals. The Rainbow Flag is recognized by the International Congress of Flag Makers. The Rainbow (Pride) Flag lives in the public domain. The original flag had eight stripes from top to bottom: pink (sexuality), red (life), orange (healing), yellow (sunlight), green (nature), turquoise (magic), indigo/blue (serenity), and violet (spirit). Within a year, the flag had shed two of its stripes—pink and violet. According to Gilbert, they "ran out of pink dye." The violet stripe was later taken out to create an even number of stripes on the flag.
Posted by Noel Y. C. at 6:42 PM