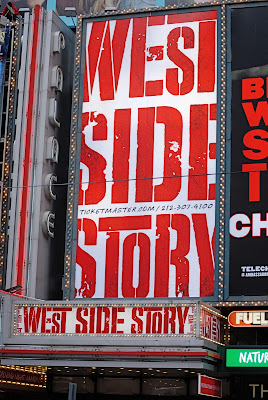 The one musical that I am looking forward to this season is the new Broadway revival of WEST SIDE STORY, which plays the Palace Theatre beginning in a couple of weeks.
From Playbill.com
Production: West Side Story, music by Leonard Bernstein, lyrics by Stephen Sondheim, book by Arthur Laurents, directed by Arthur Laurents, Jerome Robbins' choreography re-created by Joey McKneely, starring Matt Cavenaugh, Josefina Scaglione, George Akram, Cody Green and Karen Olivo.
Previews: February 23, 2009
Opening: March 19, 2009
Venue: Palace Theatre, 1564 Broadway, New York, NY 10036
Librettist Arthur Laurents directs this revival of the ground-breaking classic musical, which introduces "the unprecedented element of selectively weaving Spanish throughout both the book and songs."
West Side Story transports the achingly beautiful tale of Shakespeare's Romeo and Juliet to the turbulent streets of the Upper West Side in 1950's New York City. Two star-crossed lovers, Tony and Maria, find themselves caught between the rival street gangs of different ethnic backgrounds, the Jets and the Sharks. Their struggle to exist together in a world of violence, hate and prejudice is one of the most heart-breaking, relevant and innovative musical masterpieces of our time.
Posted by Noel Y. C. at 6:52 PM

so excited for this show. hope it saves broadway, lol.

anyway, i tagged you on my blog. check it out!