WHAT MY DAD GAVE ME - Chris Burden at Rockefeller Center 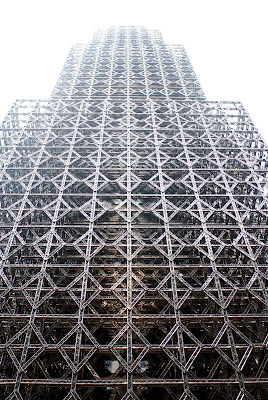 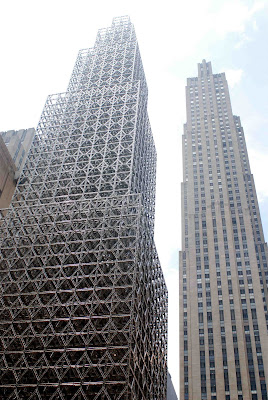 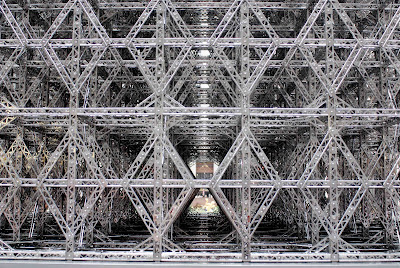 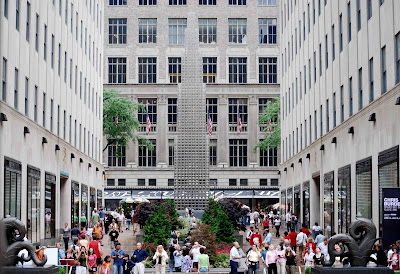 On this Father's Day, I think it's appropriate to post these photos of CHRIS BURDEN's "WHAT MY DAD GAVE ME," a dramatic, 65-foot tall skyscraper made entirely of 1 million stainless steel replica toy construction (circa 1913) parts. It is installed at the Fifth Avenue entrance to ROCKEFELER CENTER's Channel Gardens, between 49th and 50th Streets. Presented by the PUBLIC ART FUND, the exhibition runs from June 10 through July 19.
From: http://publicartfund.org
"I have always wanted to build a model skyscraper using Erector parts. The model skyscraper, built from a toy and 65 feet in height, takes on the dimensions of a full sized building. The circle of actual buildings inspiring a toy in 1909, which is then used to build a model skyscraper the size of an actual building in 2008, is a beautiful metamorphosis." —Chris Burden
This summer, internationally renowned artist Chris Burden will exhibit a new sculpture at Rockefeller Center in New York — WHAT MY DAD GAVE ME, a dramatic, 65-foot-tall skyscraper made entirely of toy construction parts. Standing more than six stories tall at the Fifth Avenue entrance to the Channel Gardens, WHAT MY DAD GAVE ME will pay homage to the historic skyscrapers that populate New York and give the city its iconic architectural presence. WHAT MY DAD GAVE ME will be on view, free and open to the public, from June through July 2008. The exhibition is presented by the Public Art Fund and hosted by Tishman Speyer, co-owners of Rockefeller Center.
WHAT MY DAD GAVE ME will be by far the most complex artwork that Chris Burden has ever made, comprised of approximately one million stainless steel parts that are replicas of Erector set pieces, the popular 20th-century children's building toy. Over the past decade, the artist has been using these specially stamped stainless steel metal parts based precisely upon those of the original Erector set to create complex and elegant sculptures of bridges. Intricately engineered to support and bear enormous weight, Burden's colossal toy constructions showcase the versatility, simplicity, and strength of their unassuming parts, combining technical sophistication with a child-like enthusiasm: building for building's sake.
In 1912, an inventor named A.C. Gilbert created the first Erector set, inspired by the steel framework of skyscrapers that he saw under construction in New York City, then at the height of a building boom. The Erector Mysto Type I—the first set Gilbert made—was a collection of small metal girders, which could be assembled with miniature nuts and bolts. Burden's fascination with this original—and now rare—building kit led him to create his own replica parts, fashioned in stainless steel and electro-plated to produce a polished nickel finish in order to make them weather—and rust—resistant.
Despite being constructed with toys, WHAT MY DAD GAVE ME will take on the dimensions of a full-scale building. Burden anticipates that its construction will require approximately one million parts total, and that the sculpture will weigh over seven tons when complete. Models and collectibles have long been important in Burden's work, reflecting his fascination with humankind's industrial ingenuity and creativity, investigating relationships between power and technology, nature and society, and enlightenment and destruction.
About the Artist: Chris Burden was born in 1946 in Boston, and currently lives and works in Los Angeles. He attended Pomona College, Claremont, California (BA, 1969) and University of California, Irvine (MA, 1971). In addition to his sculptures and installations, Burden is well-known for his live endurance works of the early 1970s, including Shoot (1971), the legendary performance in which he had a friend shoot him in the arm, and Five Day Locker Piece (1971), where he spent five days and nights in a school locker. In the late 1970s and 1980s, Burden moved away from body works to create a series of monumental kinetic sculptures involving engines and hydraulics, reflecting a fascination with engineering, invention, and technology that continues to influence his work today. Recently, Burden permanently installed 202 vintage streetlights outside the Los Angeles County Museum of Art in a piece titled, Urban Light (2008) to inaugurate its new Broad Contemporary Art Museum (BCAM).
Posted by Noel Y. C. at 1:20 PM

Email ThisBlogThis!Share to TwitterShare to FacebookShare to Pinterest
Labels: Chris Burden at Rockefeller Center, Erector Mysto Type I Toy Parts, What my Dad gave me