The International Center of Photography Museum 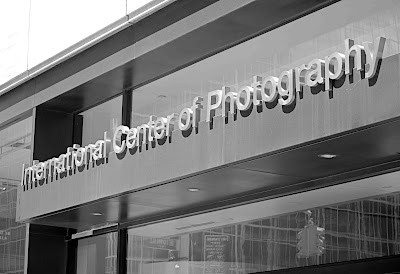 I recently visited the International Center of Photography (ICP) to view some contemporary works of art by young Japanese artists. The ICP is located at 1133 Avenue of the Americas at 43rd Street in Mahattan .
Current exhibitions: (http://www.icp.org)
May 16–September 7, 2008
Heavy Light: Recent Photography and Video from Japan
Heavy Light will present the exciting and highly individualistic work of a new generation of Japanese artists who have come of age following the Asian economic crash of 1990. For the last several years, China has been the focus of attention for contemporary Asian art, while the remarkable and distinctive younger generation of Japanese artists who are working today has been largely ignored. This exhibition will be the first major U.S. presentation of contemporary photo-based artwork from Japan in over ten years. Curated by ICP curator Christopher Phillips and Noriko Fuku of the University of Art and Design in Kyoto, Heavy Light will be accompanied by a comprehensive catalogue and a range of public programs.
Bill Wood's Business
Bill Wood's business was photography— and he produced tens of thousands of images over the course of his career. From 1937 through the boom years that followed World War II and until his death in 1973, the Bill Wood Photo Company supplied local snap shooters and amateur photographers with cameras, flash bulbs, accessories, and quality photo finishing. In addition, the business provided commercial photographic services: using large format cameras, and shooting mostly black-and-white film, Wood offered studio portraits and professional photographs. The variety of subjects and situations he captured provide an in-depth photographic record of life in Fort Worth, Texas, a post-World War II American city just hitting its stride. Bill Wood's Business, a document of the encyclopedic range of his work, is organized by Diane Keaton and Marvin Heiferman.
Arbus/Avedon/Model: Selections from the Bank of America LaSalle Collection
This exhibition brings together works by three of the most important photographers of the 1960s: Diane Arbus, Richard Avedon, and Lisette Model. The intense creative relationships between these three artists helped to generate a new look in photographic portraiture, an idiosyncratic approaches to both style and subjects. Even today, their works are shocking in their boldness, and at the time their works, widely seen in magazines as well as on gallery walls, were revolutionary. The fifteen now-classic works in this exhibition are drawn from the exceptional corporate collection of photography initiated at the LaSalle Bank of Chicago by Beaumont Newhall in 1969, and recently acquired by Bank of America. The exhibition is organized by Brian Wallis, Chief Curator at the International Center of Photography.
Posted by Noel Y. C. at 4:15 AM