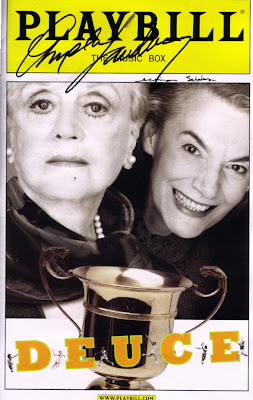 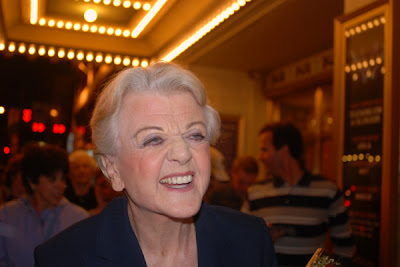 "Few stars can make a banquet out of table scraps as Ms. Lansbury does." - The New York Times
Without even knowing what DEUCE really meant, I went to see this new play at the Music Box Theatre last night. We got great orchestra seats through TKTS, which I think is a good way to get 50% off tickets especially on Tuesdays and Wednesdays. In this play by four-time Tony winner Terrence McNally and directed by two-time Tony winner Michael Blakemore, ANGELA LANSBURY and MARIAN SELDES star as retired doubles tennis legends reunited at a championship match. The two former athletes try to make sense of the partnership that took them to the top of their game. It was such a joy to see the two actresses who are considered theatre royalty in a play that is so simple yet persuasive and funny. The show is not about tennis, but more about life - getting old, relationships, zest for life, and coming to terms with one’s life. Angela Lansbury received another Tony Award nomination for her performance.
Here is what the critics say:
For the ASSOCIATED PRESS, Michael Kuchwara wrote "-Terrence McNally's "Deuce" is a wisp of a play, more a conversation between two old friends than a full evening of theater. But if you are going to listen to two people talk, it helps to have the chatter delivered by the heavenly Angela Lansbury and the equally celestial Marian Seldes."
For VARIETY, David Rooney writes that "It's standard-issue benevolence, with both theater critics and fans, to describe thesps who continue working long after they receive their AARP cards with terms like "national treasure" or "theater royalty," or with adjectives such as "cherished" or "beloved." Cliche or not, that language is unavoidable when confronted with the redoubtable team of Angela Lansbury and Marian Seldes, bringing their wit, wisdom and ineffable class to Terrence McNally's slender trifle, "Deuce." The comedy began life as a playlet written for a benefit and, even as a 95-minute one-act, shows its stretch marks. But anyone with a deep affection for the theater won't want to miss these rare birds bantering."
For NEWSDAY, Linda Winer writes that ""Deuce," which opened Sunday night at the Music Box, is not nearly the disaster howled about for weeks by the Internet chatterers. What it is, alas, is dull. There are definite pleasures in watching these beloved actresses trying to persuade us -- and themselves? -- to be fascinated and touched by the reunion of two aging tennis champions being honored at the U.S. Open.But it would be patronizing to these formidable women to pretend they don't seem wedged into a vehicle too flimsy for their muscle."
Clive Barnes in the NEW YORK POST writes that "It's a short but long haul - no intermission, so no one's inclined to leave - and Lansbury and Seldes go at it with such endearing professionalism and wondrous skill, that their mighty efforts to make a house not just without bricks but even without straw are truly admirable."
Elysa Gardner in USA TODAY writes that "Watching the leading ladies try to breathe life and wit into these near-caricatures, you're torn between marveling at the actresses' transcendent grace and wondering what led them — particularly the long-absent Lansbury — to take on this project. Perhaps they expected more from McNally, a prolific and generally endearing writer; in that case, many theatergoers will surely empathize."
Ben Brantley writes in the NEW YORK TIMES that "Though she rarely moves from her chair in “Deuce,” she still makes you believe Leona pulses with a defiant élan vital that only death could still. You know what Midge means when she says of Leona, “She doesn’t look, she devours.” When an actress, no matter her age, convincingly conveys that appetite for life, an audience repays her with similarly voracious attention. Few stars can make a banquet out of table scraps as Ms. Lansbury does."
Posted by Noel Y. C. at 3:34 AM