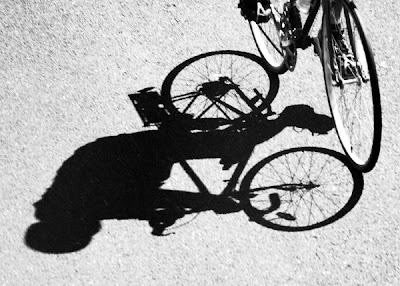 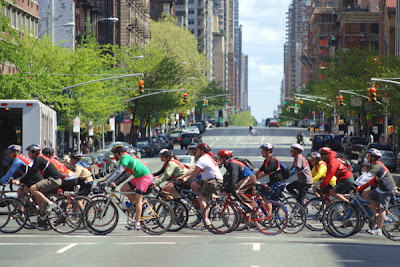 I made these photographs of the cyclists from an overpass above the FDR drive, and on First Avenue, as the cyclists rode 63rd Street on the Upper Eastside.

Yesterday, May 6th marked the 30th anniversary of the Bike Tour through the five boroughs of New York City. Thirty thousand bicyclists, young and old, new to biking and expert cyclists rode 42 traffic-free miles of the urban landscape. For these cyclists there's no better way to see New York than biking through dozens of neighborhoods and crossing scenic bridges. The journey started in Lower Manhattan, headed north through the heart of Manhattan to Central Park and continued on to historic Harlem and the Bronx, returning south along the East River on the FDR Drive. From there they crossed into Queens and then Brooklyn, where cyclists took over the highway before making the thrilling climb up--and down--the Verrazano-Narrows Bridge to Staten Island. The Tour ended with a celebratory Festival at Fort Wadsworth in Gateway National Recreation Area on Staten Island. Thirty years ago, American Youth Hostels encouraged people to cycle for years--in the early days of hosteling, young people were expected to cycle or hike from hostel to hostel! Eric Prager was commissioned by the NYC Board of Education to create a bicycle safety program. One of Eric's co-workers was Sal Cirami. Sal worked for the school lunch program and was also an AYH Bicycle Committee leader. The two met by chance, and a brief conversation resulted in Sal inviting Eric to the next monthly Bike Committee meeting. Eric outlined his plans for his bicycle safety program at that February meeting. Thus, the "Five Boro Challenge" was born. The tour became very popular and got bigger and bigger over the years. (Bike Tour route information from http://www.bikenewyork.org/)
Posted by Noel Y. C. at 5:21 AM