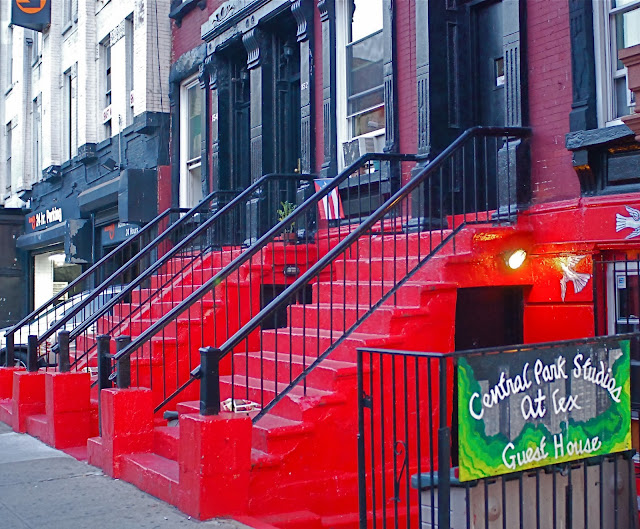 Central Park Studios at Lex Guest House, a hostel in East Harlem has bright red stoops. The word stoop was originally brought to New York by settlers from the Netherlands, meaning "a small porch." According to Mario Maffi, "stoops served many different functions: projected outward into the great theater of the street, these elevated platforms were ideal for observation, courting, a chat, or gossip... The first builders in the city brought with them their customs of erecting buildings that were elevated (as protection against the havoc wreaked by North Sea floods) and flush to the street (to make up for the lack of space in a canal-dominated city like Amsterdam). The early village of New York thus assumed an identity that, three centuries later, it still retains --- and charmingly so along certain streets and in certain neighborhoods." According to Gothamist, another reason for the existence of stoops is the amount of horse manure in the streets in the 1930s.
“In vacant lots, horse manure was piled as high as sixty feet. It lined city streets like banks of snow. In the summer time, it stank to the heavens; when the rains came, a soupy stream of horse manure flooded the crosswalks and seeped into people’s basements. Today, when you admire old New York brownstones and their elegant stoops, rising from street level to the second-storey parlour, keep in mind that this was a design necessity, allowing a homeowner to rise above the sea of horse manure." The New Yorker.
Posted by Noel Y. C. at 4:07 AM

Ahhh, the Great Manure Flood.
In Boston they speak of the Great Molasses Flood. Now that was a Brown High "water" mark.
http://www.mnn.com/family/protection-safety/stories/the-1919-boston-molasses-flood-the-forgotten-tragedy-too-bizarre#

I do really admire the old New York brownstones and their elegant stoops its a real amazing in NY to chill around and in close proximity to the Central Park Studios is the greatest advantage.
Budget hotels in New York city