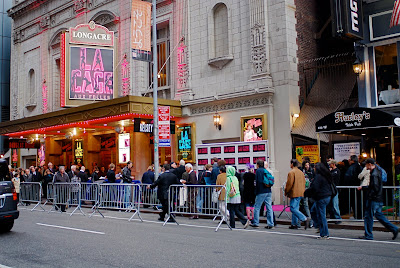 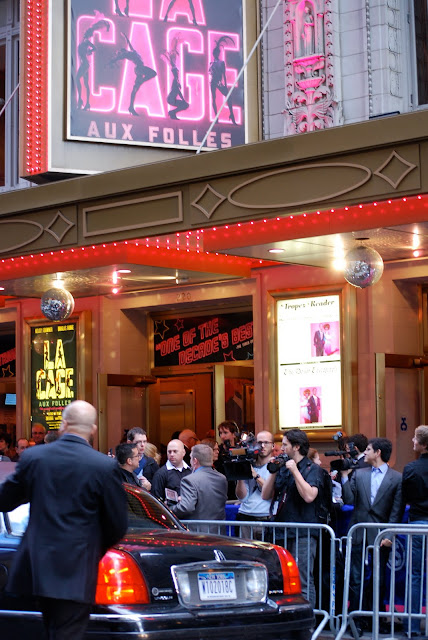 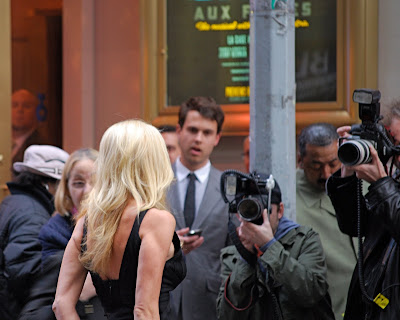 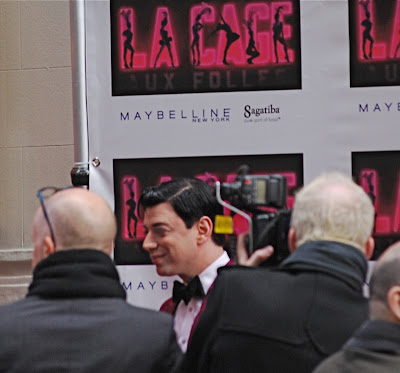 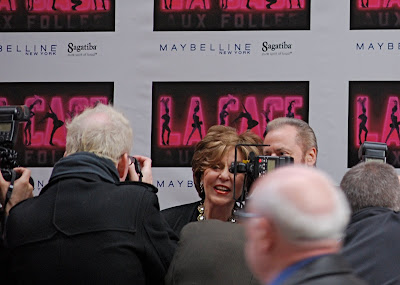 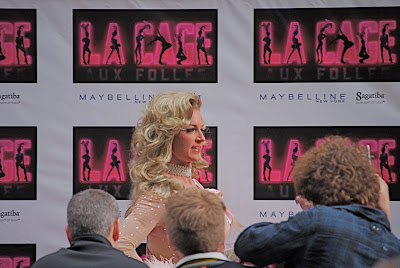 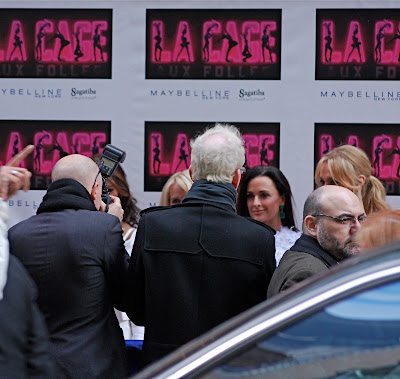 The photos above were taken outside the Longacre Theatre (220 West 48th Street) where the revival of the musical LA CAGE AUX FOLLES opened last night. Starring five-time Emmy Award winner KELSEY GRAMMER in his Broadway musical debut, and Olivier Award winner, DOUGLAS HODGE, this high-kicking musical comedy is a touching tale of one's family's struggle to stay together and stay true to themselves. La Cage features Jerry Herman's Tony Award-winning score, with such fabulous songs as "I Am What I Am," "The Best of Times" and "Song on the Sand," and a Tony Award-winning book by Harvey Fierstein.
Here is a review roundup:
From the New York Times (Ben Brantley)
Their plumage is wilting, their wigs are askew, and their bustiers keep slipping south to reveal unmistakably masculine chests. Yet the ladies of the chorus from “La Cage aux Folles” have never looked more appealing than they do in the warm, winning production that opened Sunday night at the Longacre Theater. Terry Johnson’s inspired revival ofJerry Herman and Harvey Fierstein’s musical, starring a happily mismatched Kelsey Grammer and Douglas Hodge (in a bravura Broadway debut), delivers the unexpected lesson that in theater, shabby can be not just chic but redemptive. This deliberately disheveled show, incubated at the tiny hit-spawning Menier Chocolate Factory in London, is a far cry from the high-gloss original production of 1983 or the glamorous, soulless revival that opened less than six years ago.
The Riviera nightclub of the title — run by Georges (Mr. Grammer) and the setting for a popular racy transvestite revue starring his partner, Albin (Mr. Hodge) — looks as if it could do with a coat of paint and perhaps a delousing. Georges, whose dapper evening jacket is definitely not bespoke, has a worn-down, worn-out appearance. And no matter how much rouge and mascara Albin applies, the dumpy, jowly chanteuse he becomes onstage will never resemble the screen siren of his mind’s eye.
As for the Cagelles, the revue’s scrappy six-member corps de ballet (pared down by half from their last Broadway incarnation), let’s just say that even the most myopic club patron isn’t going to mistake them for real live girls. “We are what we are, and what we are is an illusion,” they sing in gravelly chorus in their opening number. But the deception being peddled so adroitly here isn’t one of mistaken sexual identity.
What makes this version work — transforming a less-than-great musical into greatly affecting entertainment — is its insistence on the saving graces of the characters’ illusions about themselves and, by extension, the illusions of the production in which they appear. As presented here “La Cage” is (you should pardon the expression) a fairy tale, a sweet, corny story that asks us to take people (the good-hearted ones, anyway) at their own valuation.
Michael Kuchwara, Associated Press: "Is there a more appealing, entertaining argument for motherhood than "La Cage aux Folles"? Especially when mother is a quixotic, neurotic but undeniably goodhearted drag queen played by Douglas Hodge, who, by the way, is giving the most exuberant musical-comedy performance of the season."
Steve Suskin, Variety: "Why bring back "La Cage aux Folles" -- a major hit musical of the 1983-84 Broadway season, but certainly not a classic like "Gypsy" or "Fiddler on the Roof" -- only five years after its first Broadway revival? Especially when that 2004-05 stint proved a tired and unnecessary affair, suggesting that the original production (with its six Tony Awards) was stronger than the material. The producers of this new edition, which premiered at London's Menier Chocolate Factory in 2007, have a convincing answer: It's funny, heartwarming and terrific."
Thom Geier, Entertainment Weekly: "Hodge and Grammer provide a solid grounding for the show, but the rest of the cast offers all the flourishes you'd expect from a show rooted in drag performance. The six Cagelles are an impressively lithe and acrobatic ensemble (the choreography is by Lynne Page), and Robin de Jesus (In the Heights) is uproarious as Albin's devoted butler/maid who aspires to be Cagelle himself. By the end of this well-paced production, it's hard not to concur with the refrain of Albin's second-act number: The best of times is now. A-"
David Sheward, Backstage: "Why mount another Broadway production of "La Cage aux Folles" when we just had one in 2004? The answer is that Terry Johnson's London staging and its Olivier Award-winning star, Douglas Hodge, inject this 1983Jerry Herman-Harvey Fierstein musical version of the 1978 French film with ingenious razzmatazz and a heartbreaking humanity that its immediate predecessor lacked."
Michael Sommers, NJ Newsroom: "Brightly performed by a nine-member musical ensemble, Jason Carr's colorful orchestrations do well by Herman's happy, heartfelt score. It's easy to fall in love with this diminutive charmer of a production."
Scott Brown, New York Magazine: " Hodge adds something new: a touch of sputtering rage that's neither heroic nor pathetic. Too agitated to hold stage center, he jerks himself around, looking for release, but finding only an audience. And for once, the performer delivering this fight-song doesn't seem to assume his listeners share his feelings or his fight. For all the spittle and vibrato on display, Hodge's number feels strangely like a private moment. This Albin is not articulating a credo. He's simply furious."
Linda Winer, Newsday: "BOTTOM LINE seedier, funnier 'Cage'"
Jeremy Gerard, Bloomberg News: "Hodge, who is built like a long-haul trucker but still looks reasonably good in a gown, makes Albin vulnerable and a little pathetic, in addition to being endearingly funny."
Posted by Noel Y. C. at 4:11 AM

I saw this back in the 80's with my now famous cross dressing friend Miss Stonewall 2009 Chocolatina Q Dessert. It was fabulous!