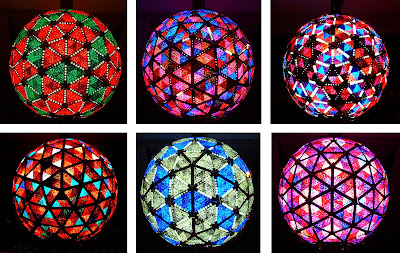 This is the actual TIMES SQUARE NEW YEAR'S EVE BALL that will descend from a pole atop One Times Square tonight, seconds before midnight to welcome 2008. This year is the New Year's Eve Ball's 100th birthday. I took some photos of the ball last November when it was displayed at the ground floor of MACY'S at HEARALD SQUARE. To celebrate it's 100th birthday, this new ball was created and it features a "greener" technology, the use of multicolored energy-efficient light-emitting diodes or LED, and the capability of "color-morphing" as captured in the images above.
From http://www.timessquarenyc.org
On October 4, 2007, the co-organizers of New Year’s Eve in Times Square (Times Square Alliance and Countdown Entertainment) unveiled the new LED Crystal Times Square New Year’s Eve Ball at a press conference at Hudson Scenic Studio in Yonkers, New York. 2008 year marks the 100th birthday of the New Year’s Eve Ball, a universal symbol of celebration and renewal.
The new Times Square New Year’s Eve Ball is more than twice as bright as the old one, with enhanced color capabilities and state-of-the-art LED lighting effects. Waterford Crystal crafted a beautiful new design for the crystal triangles on the Ball. Philips Lighting provided new solid state lighting technology that substantially increased the brightness, energy efficiency, and color capabilities of the Ball. And Focus Lighting developed a spectacular and unique lighting design for the new Ball on its 100th birthday.
“We should all look this spectacular at our 100th birthday party” said Jeff Straus, President of Countdown Entertainment, “The combination of Waterford Crystal and Philips LED technology have created a dazzling new look for this world-wide tradition of celebrating the New Year.”
“Times Square has always been an arena where the latest and greatest cutting-edge technology is unveiled and showcased. It’s also a neighborhood that’s rich in tradition – from Broadway to Tin Pan Alley to Restaurant Row,” said Tim Tompkins, President of the Times Square Alliance, “and the New Year’s Eve Ball, like Times Square, is an exciting blend of technology and tradition. This year, the Ball has been re-envisioned and re-invented, just as Times Square is constantly re-inventing itself. It’s that same spirit of renewal and new beginnings that brings people here from across the globe, in person or in spirit while watching from home, on New Year’s Eve every year.”
WATERFORD CRYSTAL created an exclusive “Let There Be Light” design for the crystal triangles on the new Ball. Designed and crafted by Waterford artisans in Ireland, “Let There Be Light” features a dramatically stylized, radiating sunburst on each of the 672 crystal triangles. Due to the new design and technical innovations, this represents an increase of 168 crystal triangles from last year’s Ball. And, for the first time, the crystal triangles will feature cutting on both sides. The double cutting maximizes the light refraction within the crystal triangles.
“Waterford Crystal is once again extremely proud to join our Times Square partners, Countdown Entertainment and the Times Square Alliance, as an integral part one of the world's most iconic symbols, the Times Square News Year's Eve Ball,” says John Foley, Waterford Crystal Chief Executive Officer. “Our craftsmen and artisans have blended the time-honored traditions that have defined Waterford through the centuries with cutting edge technology to create the magnificent crystal panels that have adorned the Ball since the Millennium. With this year's theme of ‘Let There Be Light,’ we continue to spread light and harmony to the millions who watch the Ball descend at midnight through the art of crystal.”
PHILIPS LIGHTING provided the new solid state lighting technology for the Ball resulting in an astounding increase in brightness, energy efficiency, and color capabilities. The 9,576 Philips Luxeon LEDs replaced the 600 incandescent and halogen bulbs of the previous Ball. The new Ball is more than twice as bright and capable of creating a palette of more than 16 million vibrant colors and billions of patterns. Yet, the entire Times Square Ball will be lit with approximately the same amount of electricity as it takes to power ten toasters or a single oven/range.
"Philips is extremely delighted to once again light the Times Square Ball and to be a part of this year's revolutionary makeover in celebration of the Ball's 100th birthday," said Philips Lighting Company Director of Corporate Communications Susan Bloom. "In keeping with Philips Lighting's mission to deliver innovative and energy-efficient lighting solutions to the world, the globally-recognized Times Square Ball represents an outstanding platform to demonstrate the powerful, high-performing, and highly sustainable qualities of LED technology."
FOCUS LIGHTING created a spectacular and unique lighting design that fully leverages the brilliant facets of the Waterford crystal triangles and Philips solid-state lighting technology. The lighting design skillfully illuminates the beauty of each individual triangle as well as the colorful moving patterns of light radiating from the Ball. In addition, for the first time ever, Focus Lighting designed a second layer of LEDs to showcase the geodesic structure of the Ball.
“Our goal for this year’s re-design of the New Year’s Eve Ball was to create a shining gem in the sky, equally stunning from various distances,” says Focus Lighting principal lighting designer Paul Gregory. “Working with these new lighting methods, combined with the advanced crystal cutting technique, and the flexibility of the e-cue control systems, we created a look that is vibrant and unique. This year the Ball will be brighter and more brilliant then ever before, each crystal gleaming like a diamond in the sky.”
The companies listed below also provided essential contributions to the development of the new Times Square New Year’s Eve Ball:
Dickmann Manufacturing – provided pyramid mirrors
E:Cue Lighting Control – provided lighting control system
Hudson Scenic Studio – structural engineering design and development
Landmark Signs – assembles and operates the Ball
Lapp Group – provided power and control cabling
L.E.D. Effects – integrated LED technology

History of the Times Square New Year's Eve Ball
Revelers began celebrating New Year's Eve in Times Square as early as 1904, but it was in 1907 that the New Year's Eve Ball made its maiden descent from the flagpole atop One Times Square. This original Ball, constructed of iron and wood and adorned with 100 25-watt light bulbs, was 5 feet in diameter and weighed 700 pounds. In 1920, a 400 pound ball made entirely of iron replaced the original.
The Ball has been lowered every year since 1907, with the exceptions of 1942 and 1943, when its use was suspended due to the wartime "dimout" of lights in New York City. The crowds who still gathered in Times Square in those years greeted the New Year with a moment of silence followed by chimes ringing out from One Times Square.

In 1955, the iron ball was replaced with an aluminum ball weighing a mere 150 pounds. This aluminum Ball remained unchanged until the 1980s, when red light bulbs and the addition of a green stem converted the Ball into an apple for the "I Love New York" marketing campaign from 1981 until 1988. After seven years, the traditional Ball with white light bulbs and without the green stem returned to brightly light the sky above Times Square. In 1995, the Ball was upgraded with aluminum skin, rhinestones, strobes, and computer controls, but the aluminum ball was lowered for the last time in 1998.

For Times Square 2000, the millennium celebration at the Crossroads of the World, the New Year's Eve Ball was completely redesigned by Waterford Crystal. The new crystal Ball combined the latest in technology with the most traditional of materials, reminding us of our past as we gazed into the future and the beginning of a new millenium.
About "Time-Balls"
The actual notion of a ball "dropping" to signal the passage of time dates back long before New Year's Eve was ever celebrated in Times Square. The first "time-ball" was installed atop England's Royal Observatory at Greenwich in 1833. This ball would drop at one o'clock every afternoon, allowing the captains of nearby ships to precisely set their chronometers (a vital navigational instrument).
Around 150 public time-balls are believed to have been installed around the world after the success at Greenwich, though few survive and still work. The tradition is carried on today in places like the United States Naval Observatory in Washington, DC, where a time-ball descends from a flagpole at noon each day - and of course, once a year in Times Square, where it marks the stroke of midnight not for a few ships' captains, but for over one billion people watching worldwide.
Posted by Noel Y. C. at 11:59 AM